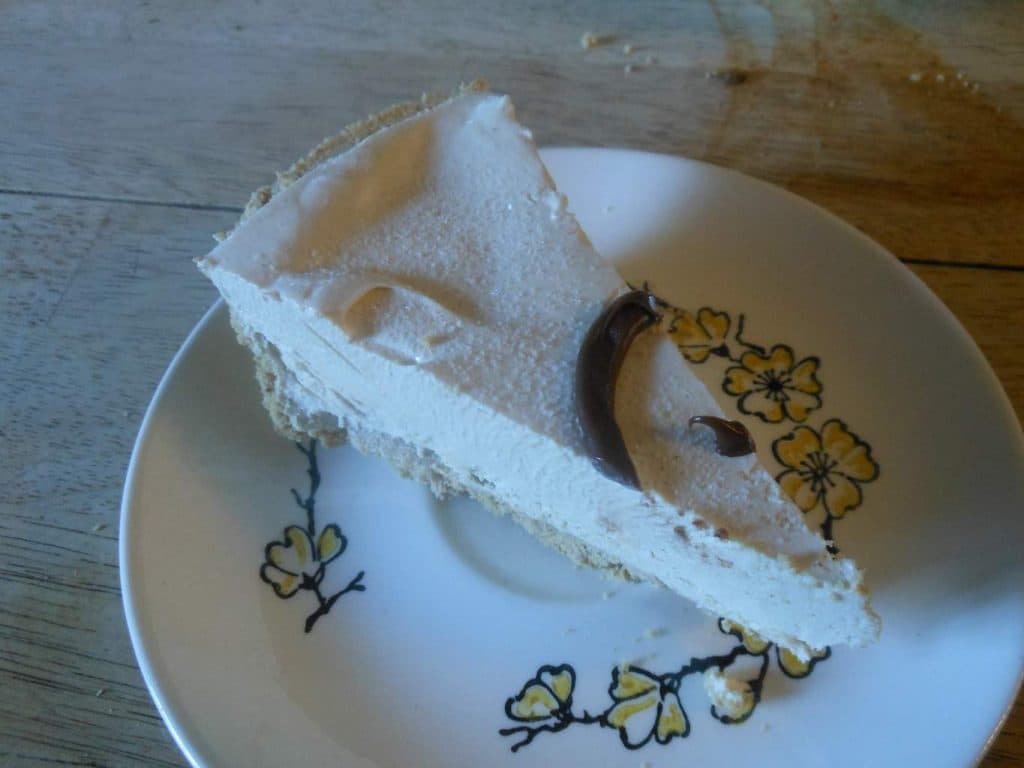 In all the time that Chad and I have been together, he has made me exactly three things:

We both had to work on our first Valentine’s Day together, so like many people do, we chose to celebrate the weekend before. Specifically, the Saturday before.

I used to work on Saturdays. EVERY. SINGLE. SATURDAY.

While I was working Chad kept sending me strange text messages. One asked, “What is confectioner’s sugar? Is that different from regular sugar?” It was shortly followed by, “Where is the peanut butter?” and then, “How do you soften cream cheese?”

I was beginning to wonder just exactly what sort of disaster would be waiting for me when I got home?

Then came the frantic phone call. It went something like this:

Chad: “Hey. How do you fold something?”

Me: “Are you asking me how to do laundry? Are you doing laundry?!”

Chad: “No, no. I mean when you’re cooking. Like if the recipe says to fold it in… what’s that mean?”

But there was pie. Peanut butter pie. Executed perfectly, folding and all. 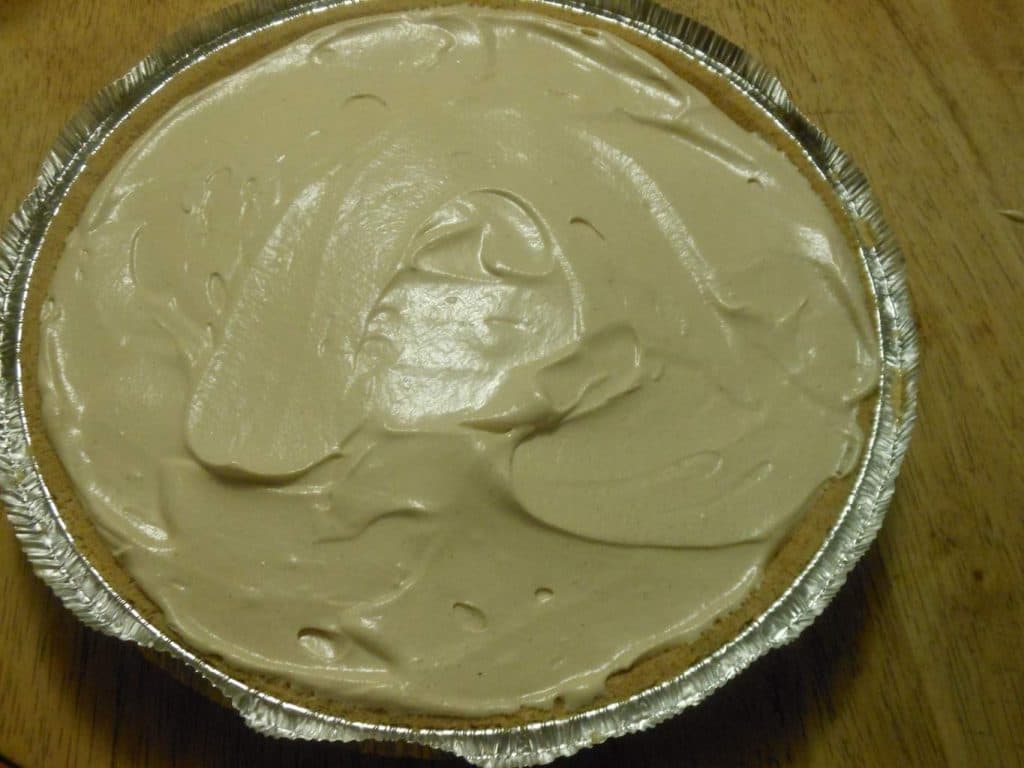 Today is my birthday.

And for my birthday, Chad made me his now famous no-bake peanut butter pie. 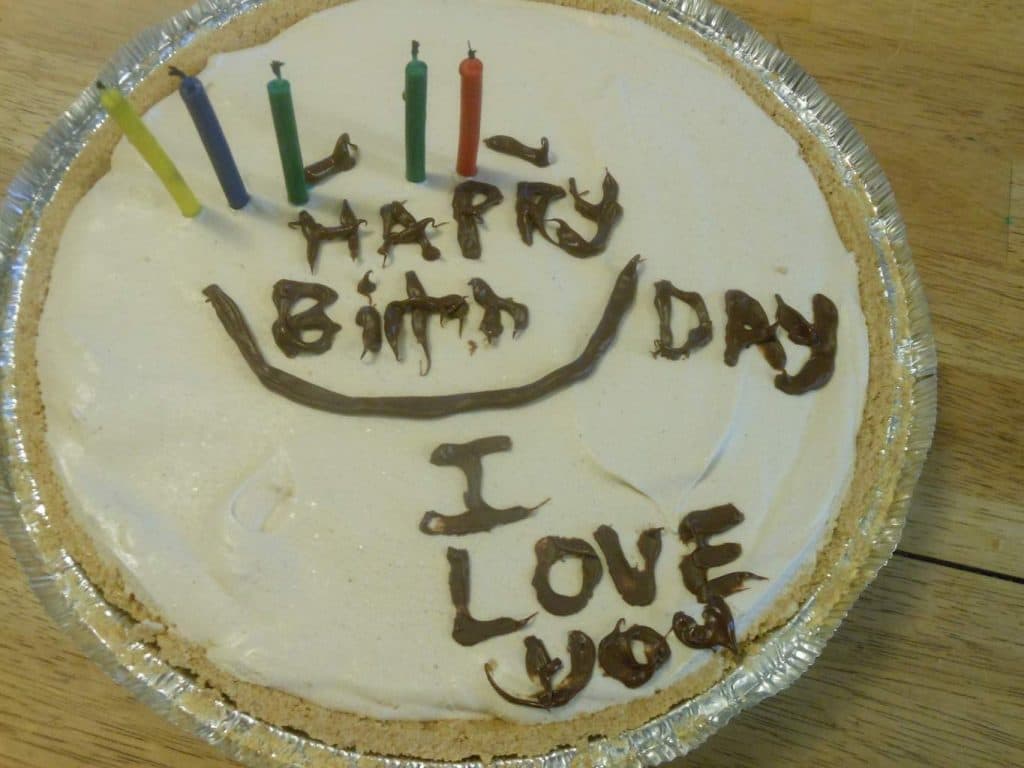 He also managed to get his hands on my cupcake decorating kit and with a pastry bag and a Wilton #230 tip he piped the words on my birthday pie with Nutella.

I think he loves me.
**Note: Before I publish this I am supposed to tell you that Chad DOES know how to spell “birthday”, but the Nutella got away from him. If you look closely the lower case “r” just rolls right on into the cross of the “t”**

I caught him in the act this time, measuring peanut butter ever so carefully and folding Cool Whip into softened cream cheese.

And because this pie is so completely delicious, so creamy and cool and rich with peanut butter and that sandy graham cracker crust, I photographed Chad’s efforts. Here is my gift to you: 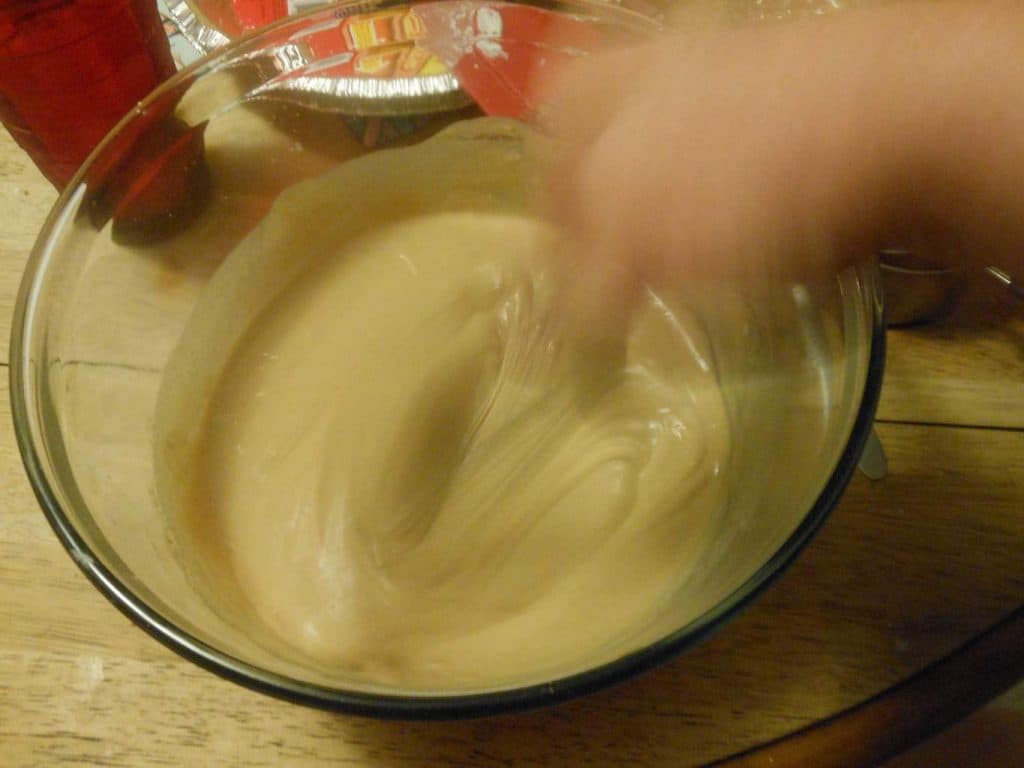 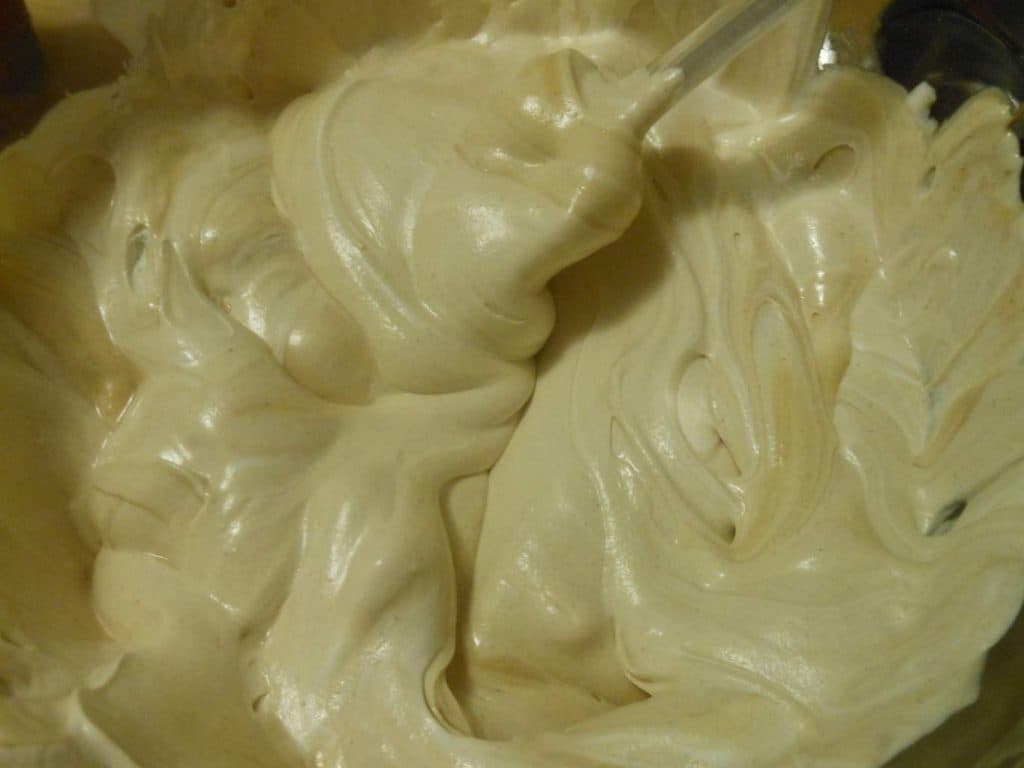 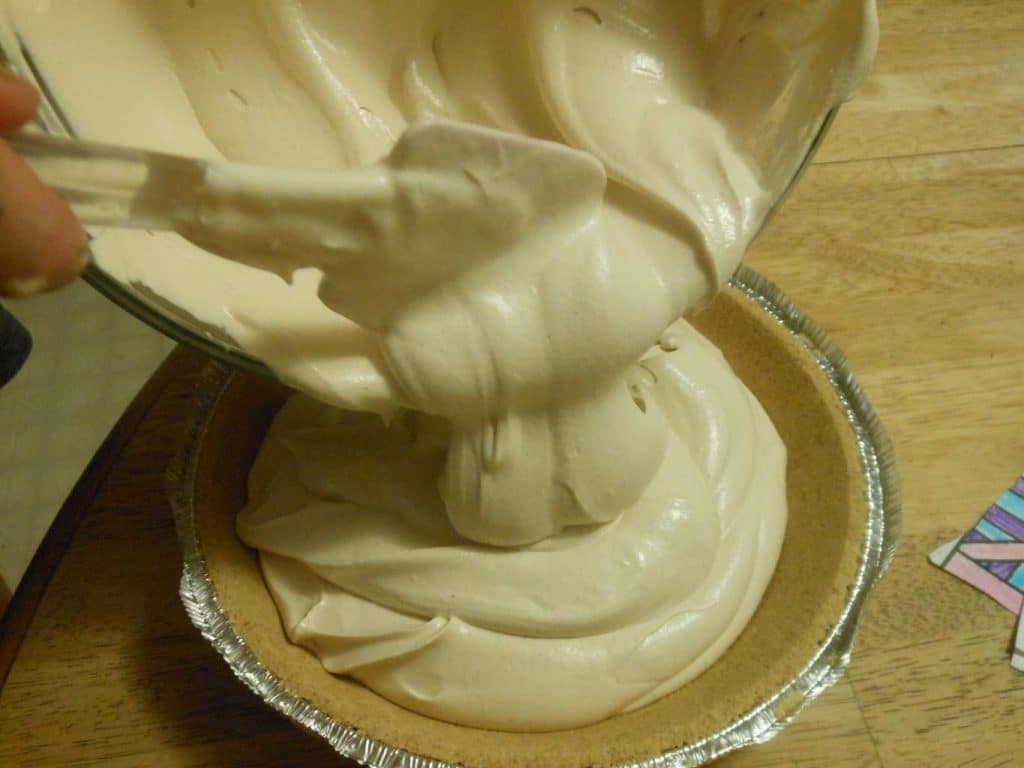 ** I’d like to see what happens when you substitute Nutella for the peanut butter? Or Use a chocolate pie crust? Pretzel crust… mmmmm** 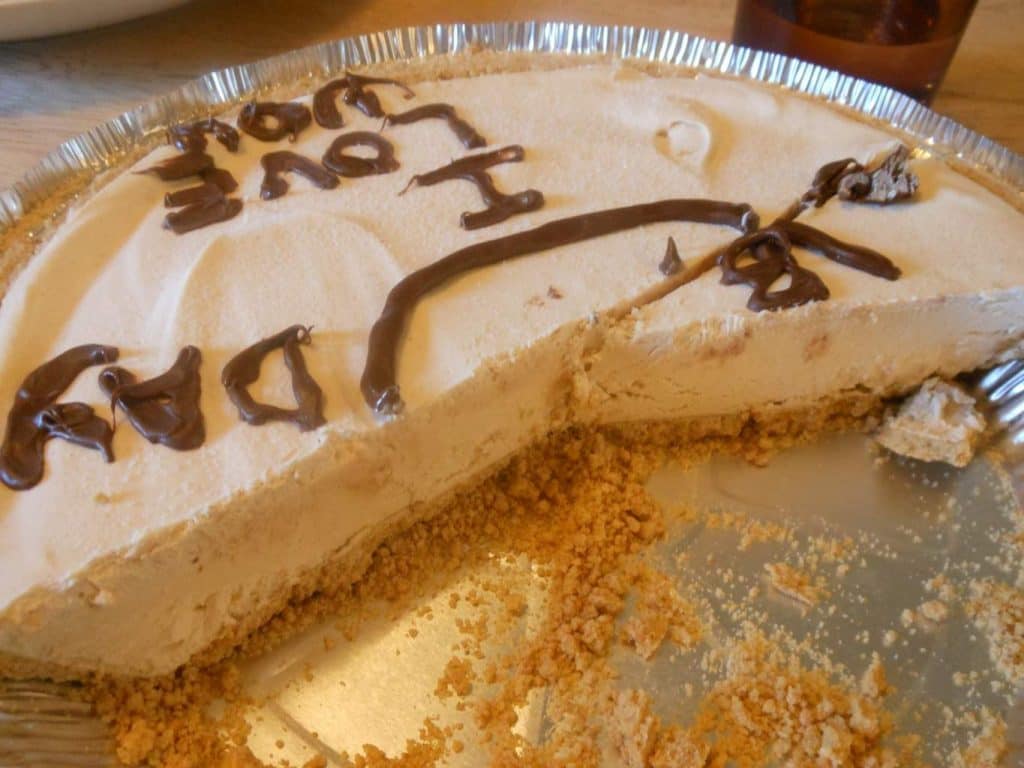 […] day we went to my mom’s house (a.k.a. Birthday Central) to celebrate with my family. As if the peanut butter pie weren’t enough, my mom stayed true to my, ” I dunno… something fruity,” […]

[…] but he does things for me. All the time. Like on my birthday when he built me a garden and made me a pie. That pie was sooooo worth a […]

[...] you count the No-Bake Peanut Butter Pie that Chad made me for my birthday. Which I’m gonna say DOESN’T count since it’s no-bake and also Chad’s [...]

Happy Birthday, Heather! What a delicious looking pie and such a sweetie for Chad to make it for you! I can totally see some creative variations with this pie!

Thank you, Sandra!! It was so so sweet for him to make this pie :) And you're right -- the possibilities are sort of endless! I need a potluck or family cookout to come up so I have an excuse to play with this recipe a little.