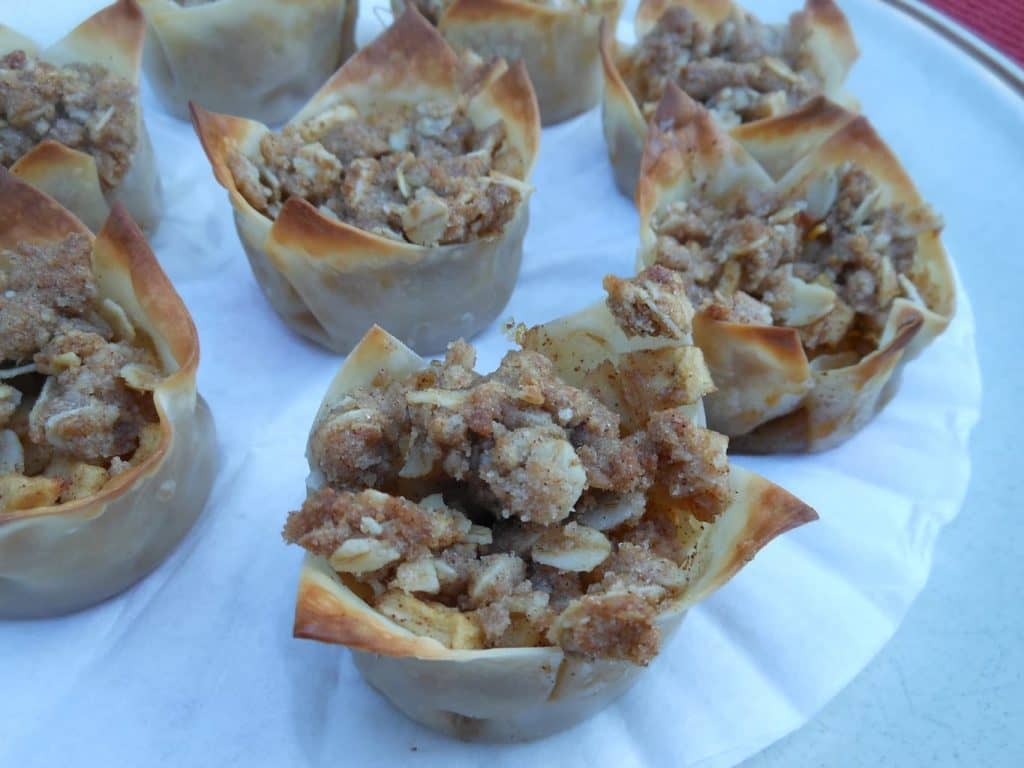 When my boys were little bitty there were a bazillion things we did together, no shortage of games we played. They were content to color with me for hours and make a mess with the finger paints. I can remember Andrew crawling through the house with all his might and laughing hysterically at me clambering around in his wake on all fours.

Chutes and Ladders were what it was all about. We would sing ridiculous songs from trippy shows like Bear in the Big Blue House or Caillou and dance in front of the TV with Elmo. “C” is for cookie was our mantra. Tickles and snuggles happened all the time and I cherished that baby giggle that comes from way down deep; that is the sound of the truest sort of happy.

Sometimes the little boys would climb into bed with me in the middle of the night, creeping around so softly I never knew they were there until I woke up with one curled behind my knees and the other tucked under my arm spooning the way only a tiny person can. Those were the best mornings. 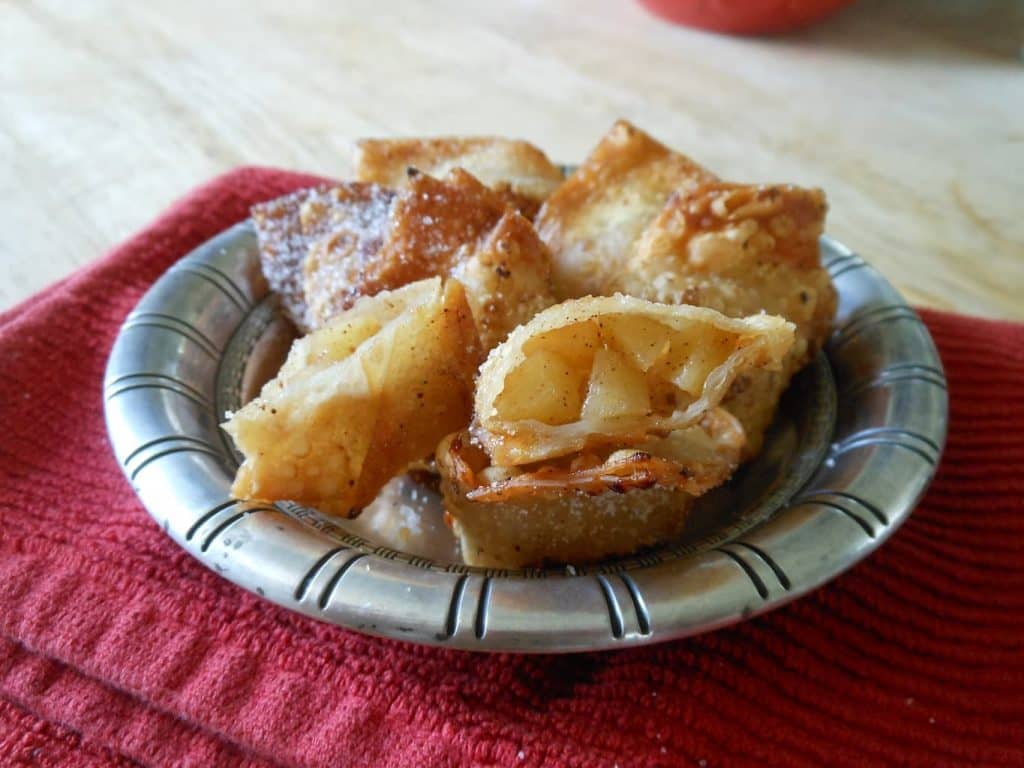 My little boys are bigger now, and they can do all sorts of things they couldn’t do back then. Andrew can cut the grass. Evan likes to help Chad work on cars. They can put away their own clothes and put their own dishes in the sink. Neither one of them throw Cheerios at me anymore.

Bigger boys don’t want to watch Sesame Street with Mommy, though. They will occasionally sit down for a game of Skip-Bo or Phase 10 Twist, but mostly they like to talk at me about things like Star Wars and Minecraft that just go right over my head. I learned a long time ago that I am just not coordinated enough to play video games.

Today I tried my hand at Mario Kart again. 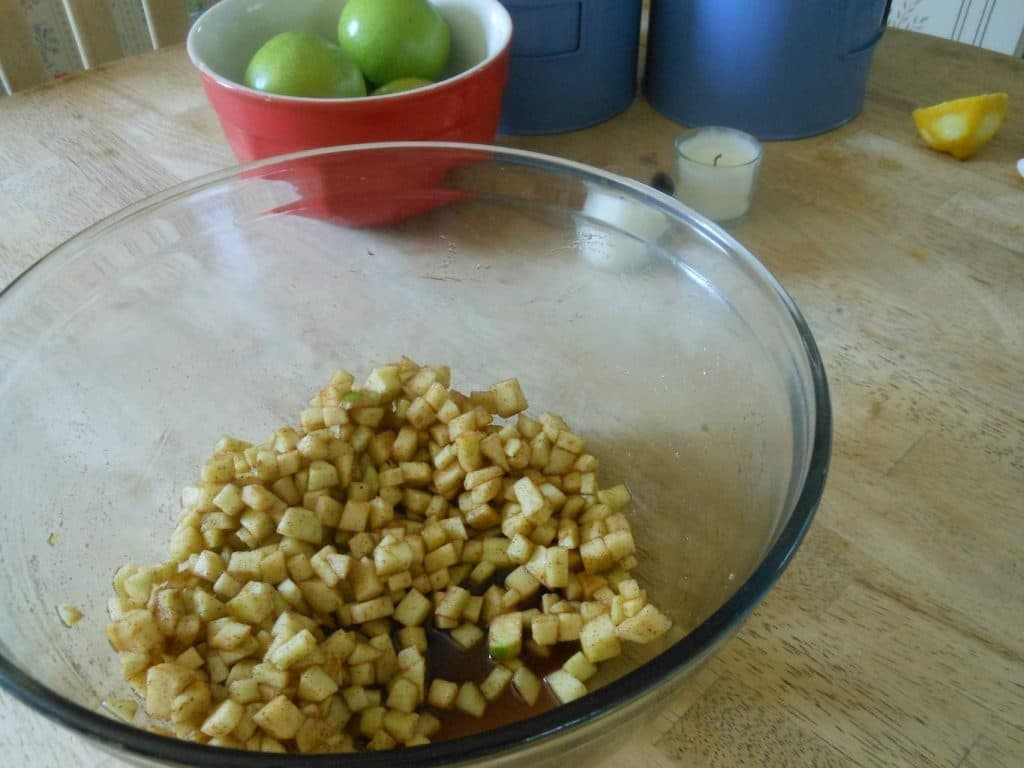 I still suck at it.

At my best I can get to about 3rd place on the easiest level. That’s bad news for whichever one of my children decides to be on my team. Evan kept saying, “That’s good, Mommy!” Andrew’s tactic was to not be on my team at all and strike me with lots of lightning. As if I needed any help driving my go-kart off an imaginary cliff.

After about 4 races the game turned into “How-to-Make-Fun-of-Mommy-Playing-Mario-Kart”. It goes like this: The boys take turns picking the hardest levels they can think of (Rainbow Road anyone?!! Anyone?) while snickering to each other because they think they are tricking me. They laugh hysterically when I can’t keep my go-kart on the moving road made of rainbows that is mysteriously located in outer space. Then they shoot turtles at me and laugh some more when I protest and say it’s not very nice. Evan had an attack of conscience after about my 3rd try and willed himself into 12th place so I could feel victorious in 11th. 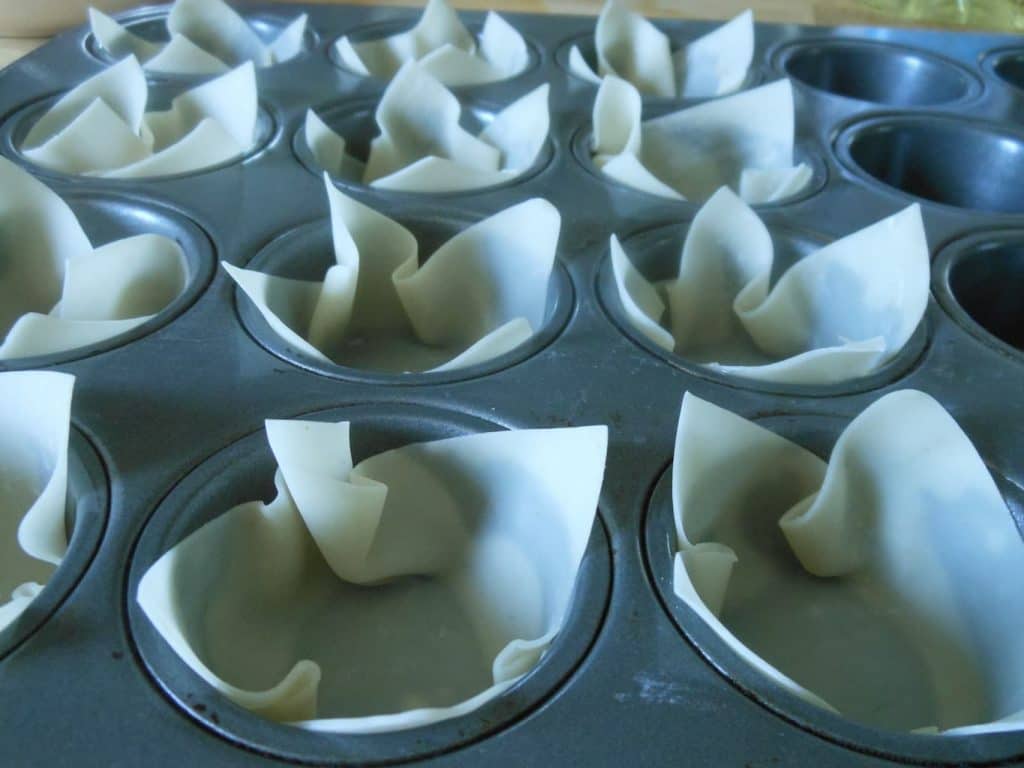 Maybe I am doing something right.

I decided after the Mario Kart massacre that we would try our hands at something I can actually do. Because even though the little boys are bigger I still really want them to play with me. 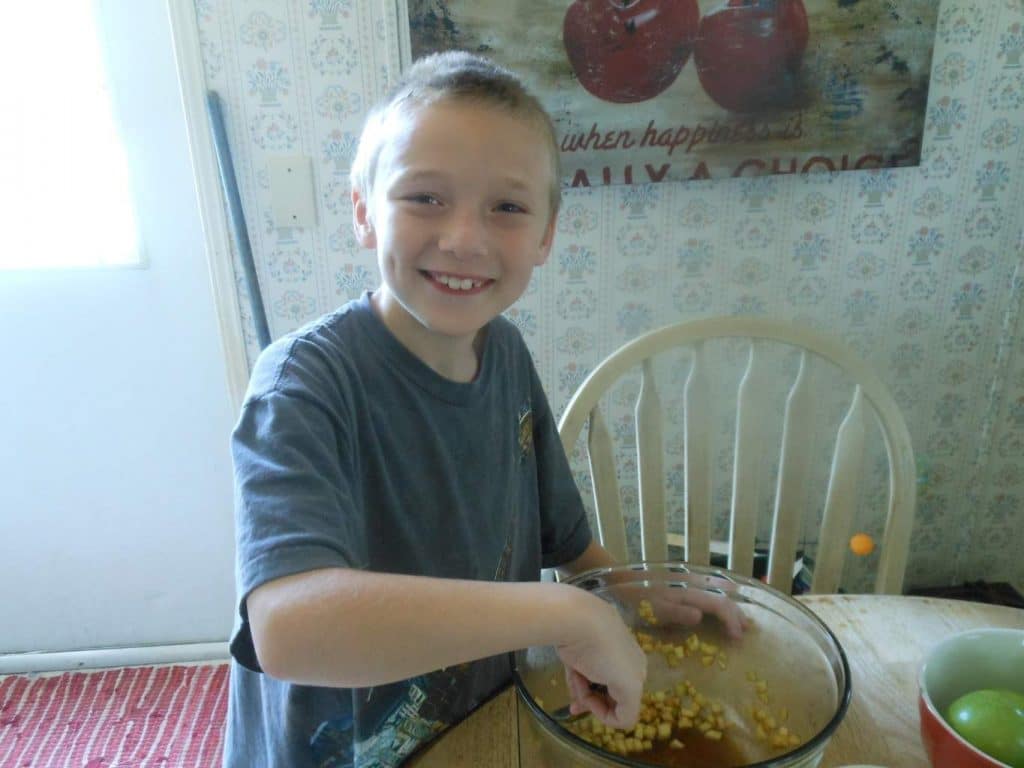 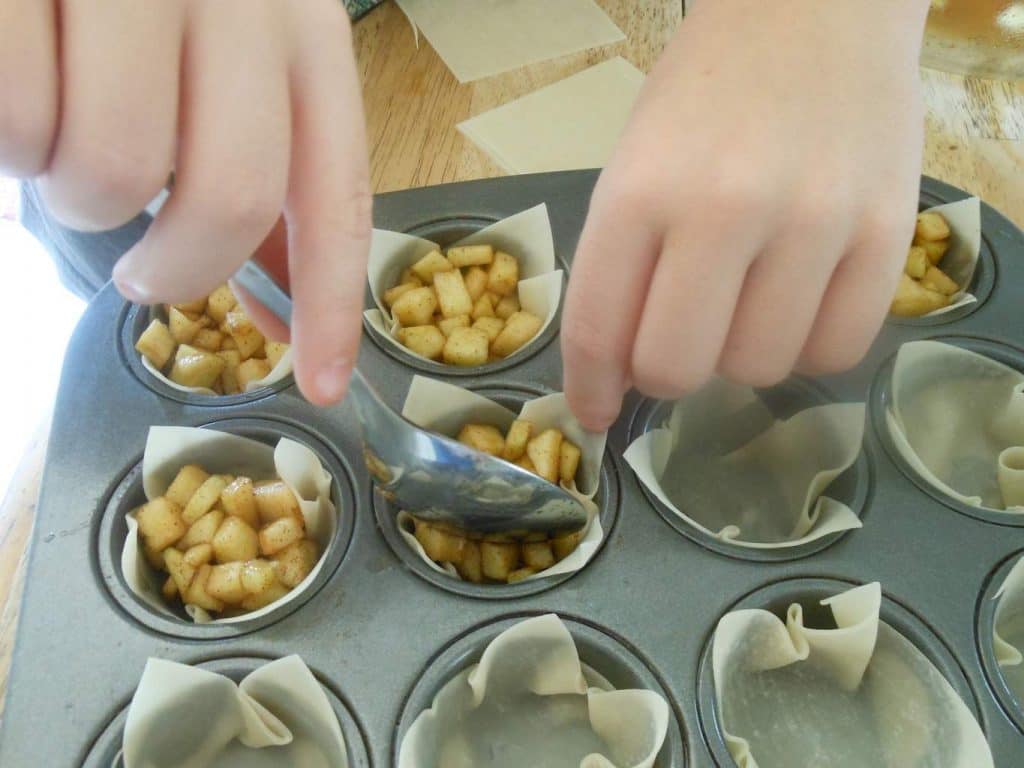 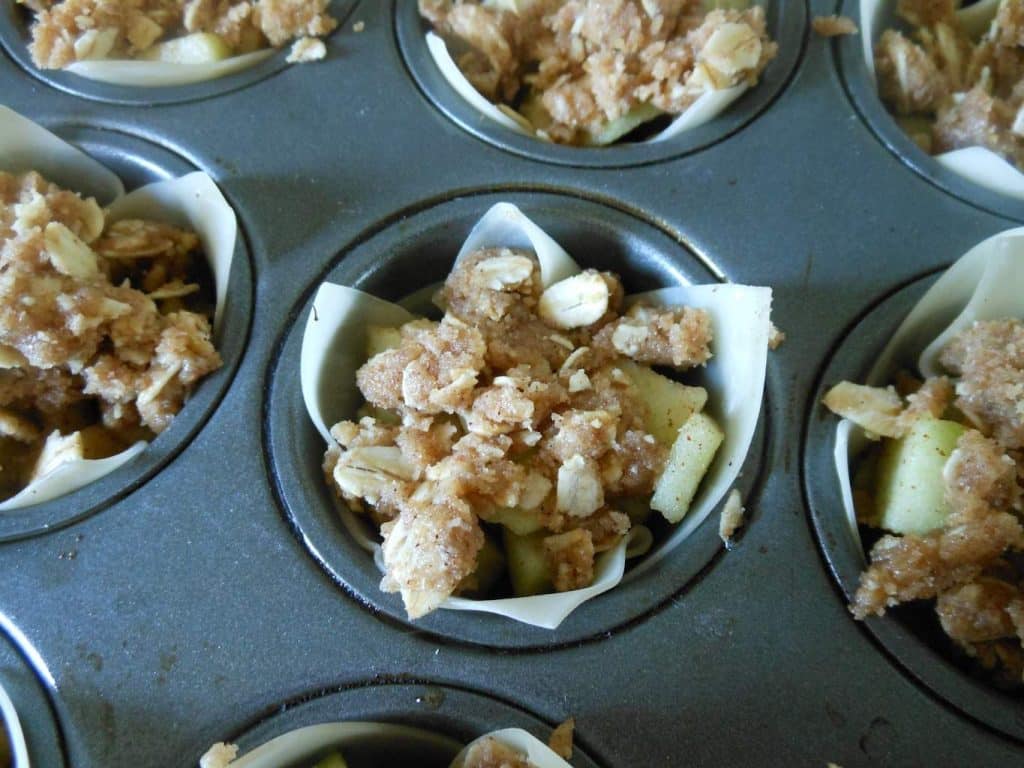 These mini-apple pies used wonton wrappers for a light crispy crust. They were so so simple! We mixed up a little bit of the topping we used for the fruit crumble and sprinkled it on top of each one. Baked at 350 for about 10 minutes until the filling bubbled and the wonton crust was a pretty golden brown.

Evan did a super good job lining the mini-muffin pan and spooning the filling into the apple pies. While we waited for these to bake we made a few itty bitty fried pies with the little bits we had left. 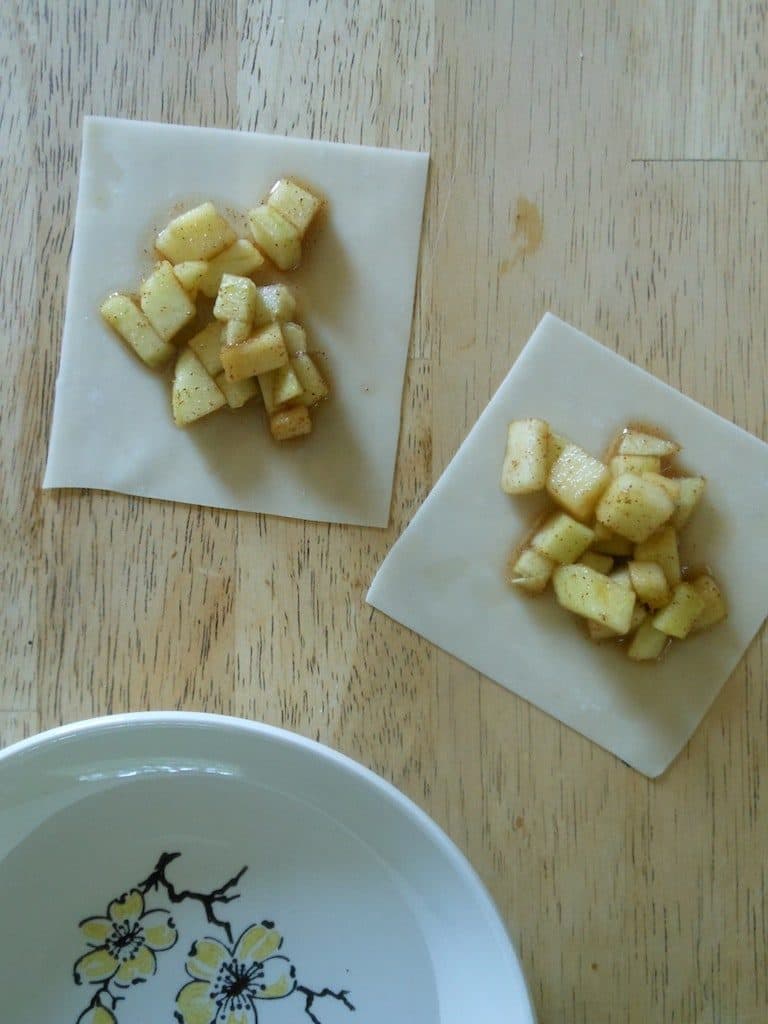 We filled these wraps just like we do with ravioli; for step by step photos and instructions click HERE. The only difference is that we pinched together the two bottom corners to make little apple pie envelopes. These babies got dropped in some hot oil until they were crispy and golden and then they were dusted with cinnamon and sugar.

Andrew discreetly made about 15 unnecessary trips through the kitchen to steal one of these teensy fried pies each time he passed. 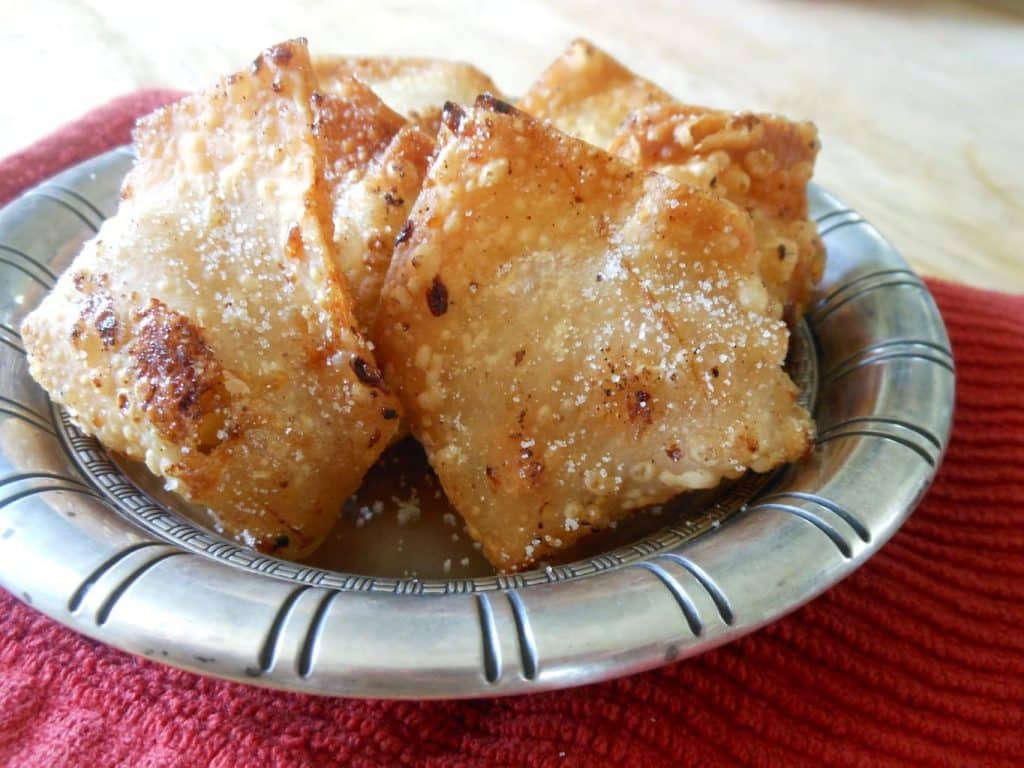 Evan was way proud of these sweet treasures.

So fun, and no game controllers involved, and they didn’t make fun of me anymore. 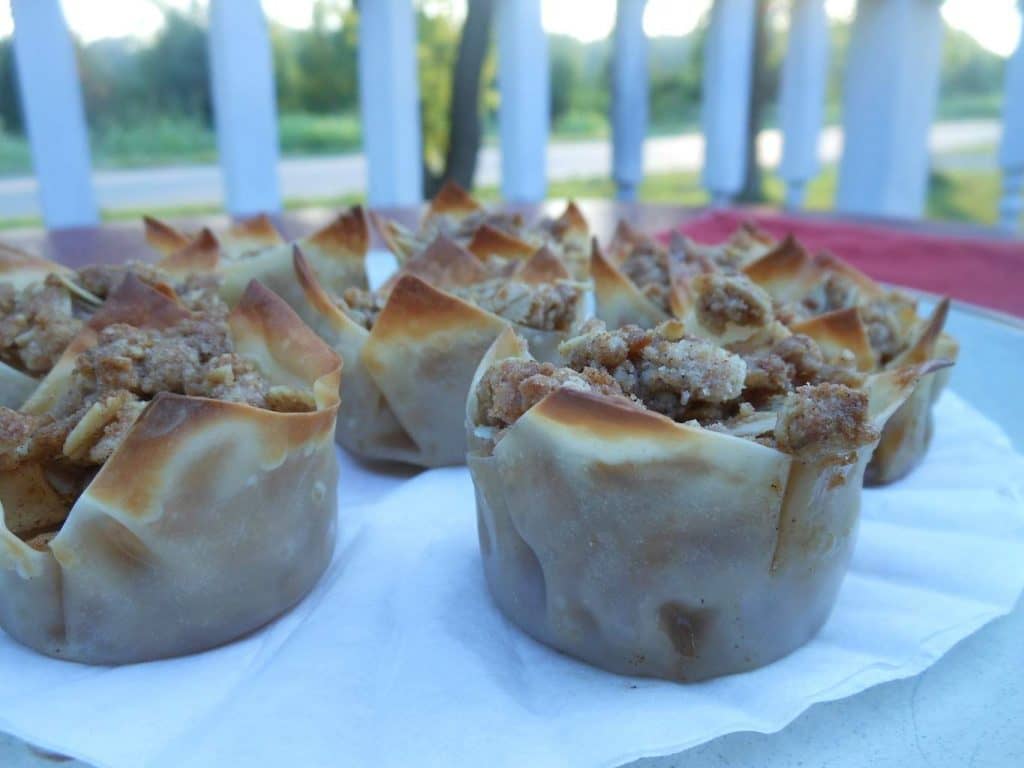 Lol! I haven't played it but considering the last thing I played was Tekken and that too years ago, I bet my skills are worse. I LOVE what you have done here!! Wanton wrappers are such a handy way to make quick finger foody apple pies. Yum yum. And they look great; perfect for a picnic or high-tea.

Wonton wrappers are so versatile! I love them. The fried pies were my favorites. I suck at all video games. There is seriously no hope for me.

So cute this dish looks :) When you have some time, do drop by my blog. I just made some custard and would love to know what to think of my recipe :)

I love the name of your blog! So adorable! I'll be sure to check it out!

OMG these little mini apple delights are so cute and delicious-looking! I wonder how other fruit would fare...like strawberries? With cool whip or whipped cream on top? Yummy! Great idea!

I ate all the strawberries or I would have fried the empty wontons like I would a taco shell, dusted them with cinnamon & sugar, a drizzle of honey and then strawberries and whipped cream. YUM!!! Also Joy the Baker has wonton wrappers stuffed with Nutella and strawberries and then fried. Wow.

What a lovely post - so great to do things together with your children. And what tasty treats too!

Aww thanks! I love to play with my babies, but they're getting big and I don't really know how to play big boy games!!

I don't have the patience for video games, so I suck at them too! Haha!

I have wonton wrappers and was thinking of stuffing them with the filling from Asian lettuce wraps, but now taste buds say I should try these cute little apple pies. They are so adorable. I love mini treats! I bet your house smelled wonderful!

Hey Sandra!! I hope you'll try these! We loved them. I love how totally versatile wonton wrappers can be. Lettuce wrap filling sounds delicious, too!