Warm bread pudding made with cream and Lucky Leaf Premium Blueberry Pie Filling, and then topped with a rich whiskey butter sauce. Blueberry Bread Pudding with Whiskey Sauce is super easy to mix up and is the perfect rustic dessert to spoon out for a crowd. 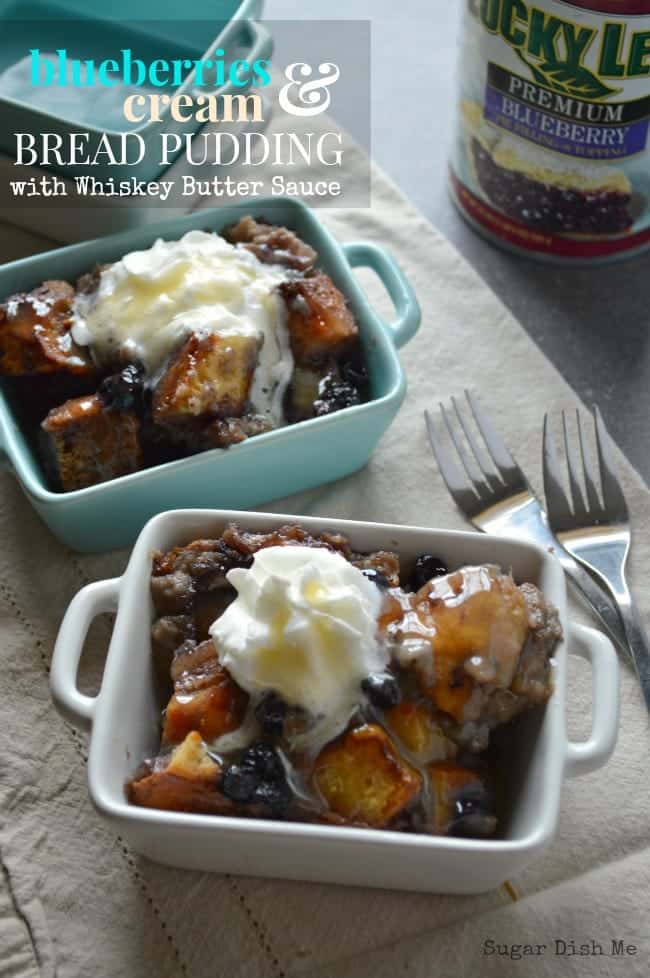 This content is sponsored by Lucky Leaf Pie Filling but all opinions, the original recipe, and photographs are my own. Working with brands I love helps me to keep sharing recipes while giving you a little glimpse into the products I use in my own kitchen.

My question for myself today is whyyyyy am I not making more bread pudding?

Blueberry Bread Pudding with Whiskey Sauce. I mean… WHISKEY SAUCE!!!  Where have you been all my life?

Clearly I have been missing out until now. But no more.

The last time I made bread pudding it was with pumpkin, and it was 2 whole years ago. And it did not have whiskey sauce. I have no idea why it has taken me this long to indulge again but I’m so glad I did.

Recently I have been slightly obsessed with pie filling. You might have noticed a trend with these Cherry Pie Pancakes and this Black Forest Coffee Cake. It’s like the greatest most delicious little shortcut to wander into my kitchen since my box grater. 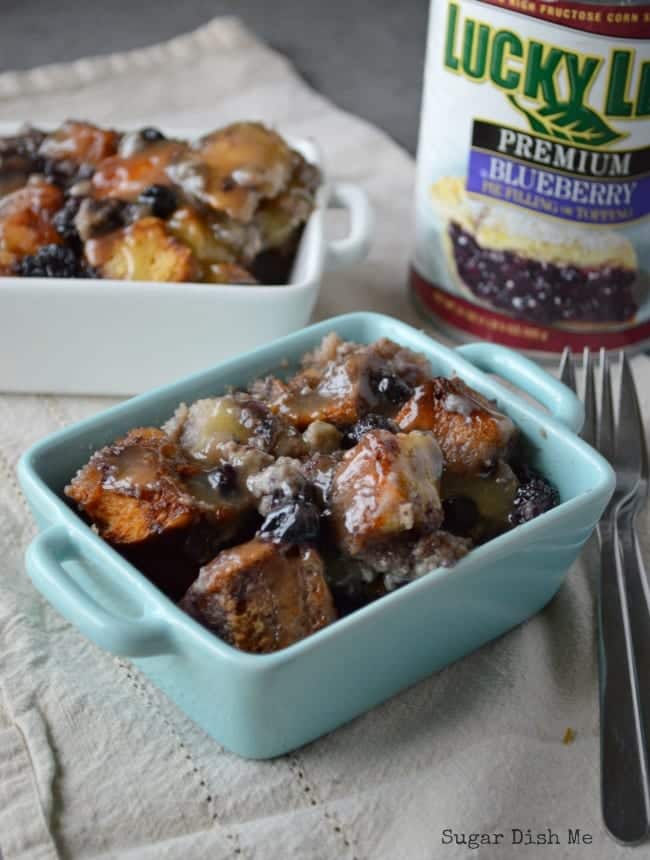 So I used this happy little shortcut in this recipe too, with Lucky Leaf Pie Filling. Obviously if I’m not baking totally from scratch I’m gonna be fickle about my purchase . {P.S. I love the word ‘fickle’} Nothing can ruin a recipe faster than substandard ingredients, amiright? I was so impressed with how this blueberry pie filling baked up in the bread pudding custard. The blueberries actually plumped up in the oven, just like they would if they were fresh. After I pulled this out the blueberries settled back down and the flavor was like condensed and sort of amplified.

I am all about it.

I gave you a double dose of whiskey here, too. Yeahhhhhhhh. It’s the holiday season and the weekend. Go crazy. 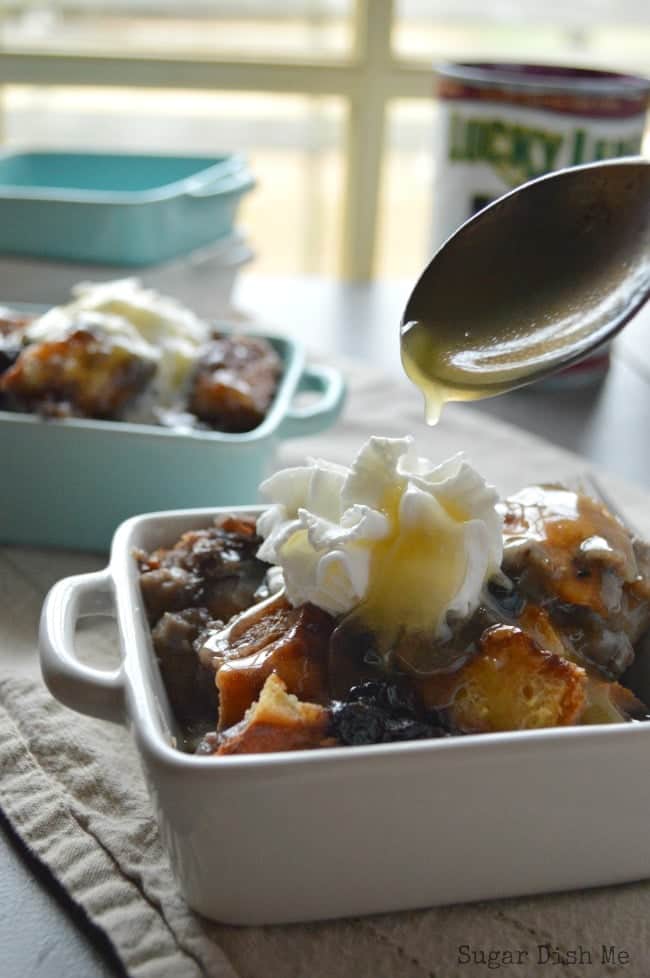 If you’ll notice the recipe instructions for the whiskey butter sauce you’ll see it calls for lots of stirring. LOTS. It’s totally worth it though, I promise.

You’re gonna melt the butter on really low heat, add some water, some sugar, and then an egg. The egg is the reason you need to pay CAREFUL attention to the low temperature. Scrambled egg sauce would probably not be the best.

So stirring all the while, you are going to slowly raise the heat over about 7 minutes. This tempers the egg and cooks it slooooooowly, just like when we make brownies. The sauce will start to simmer at the edges when you reach medium heat. Let it simmer while you stir for a second and then take it off the heat. Add salt, vanilla, and whiskey.

Just so you know I have stockpiled this stuff in my fridge. 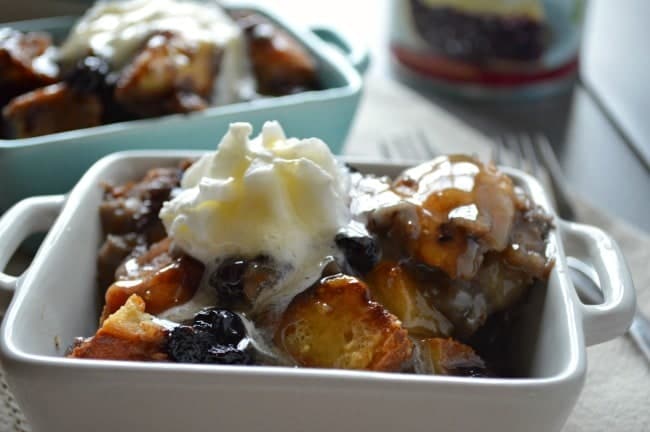 A restaurant-quality holiday dessert you can make without much effort!

Be sure to visit www.luckyleaf.com for more amazing (I mean seriously amazing) recipes using pie filling, and for product information. Follow along on Facebook, Pinterest, and Twitter to stay up to date on all the deliciousness!

OH my GAWD, Heather! This bread pudding looks and sounds amazing! And the whiskey sauce? I'm IN!!!!

Jaren (Diary of a Recipe Collector)

You had me at Whiskey sauce girl!! Looks so good!

Woohoo! I found my husbands Christmas present. :) Love it all!

Perfect present! Thanks so much Ginny!

This looks over the top delicious! Gives me inspiration for making something similar that is gluten-free! Thanks!

I'd love to see this in a gluten free recipe! Thanks Michelle!