This Hunka Burnin’ Love Elvis Banana Bread is moist and fully loaded with peanut butter and mini chocolate chips, and it’s topped with candied bacon! It really doesn’t get much better than this. 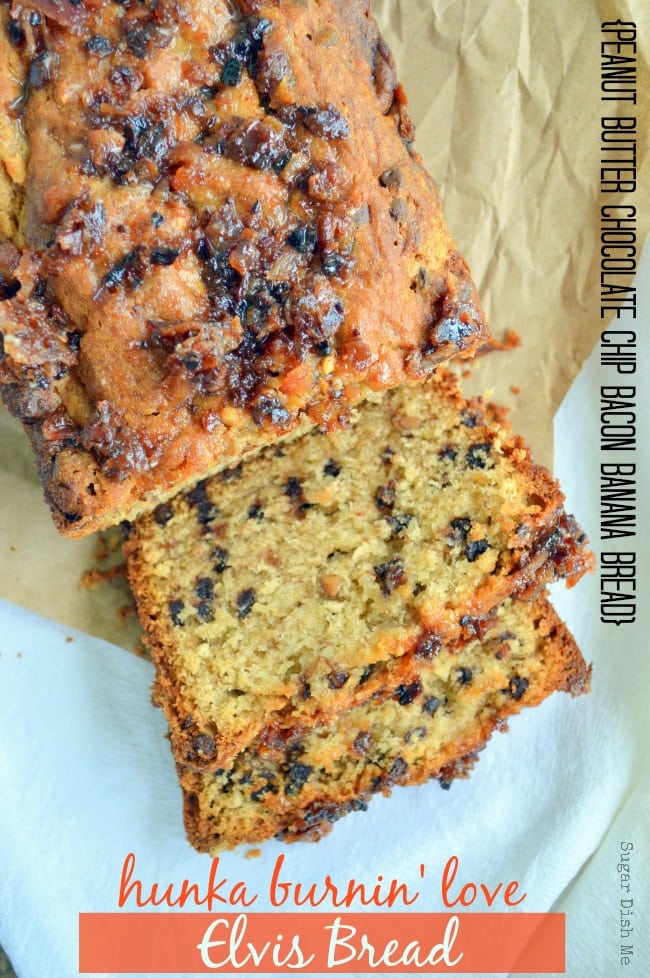 I totally went there.

Because yummy-everyone-loves-it banana bread needed some spiffing up.

Did I ever tell you that banana bread was the very first thing I learned how to make all by myself? It is the base for all my kitchen love. Cream butter, add sugar, slowly beat in eggs, then add bananas. <<– words to live by.

I gleaned those little nuggets of wisdom from one of those church cookbooks with the red plastic binding and lots of recipes that call for things like Cheez Whiz and oleo when I was 9 or so. 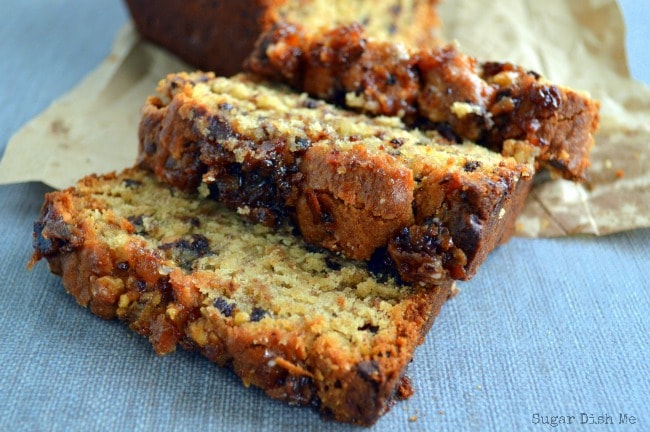 So I had this whole little train of cooking thought to share with you,  but our regularly scheduled programming has been interrupted by my family, quite possibly the most distracting people in the universe.

While I sit on the sofa with my laptop trying to tap out a few sentences that make sense sans 10000 grammatical errors, I have Chad, my awesome other half, to my right, watching YouTube videos of very grunt-ey and gross weight lifting guys doing stupid things to look like they have no neck. Betty, my very adorable and mouthy puppy, is laying at my feet doing this under-the-breath bark thing, just in case there is an intruder. Gidget, otherwise known as The World’s Most Annoying Cat, decided that she needed to not only be on my lap, but that she had to drape herself over my arm with her happy claws of doom pricking the skin through my tank top.

And then, just to see if I was close to my breaking point, Chad started chewing ice.

It’s really only a matter of time before one of the kids comes up the stairs and tells me that Piccachu has 4326 Smurf points and has exploded all the Creepers in Clash of Clans or some kind of garbledy gook like that. 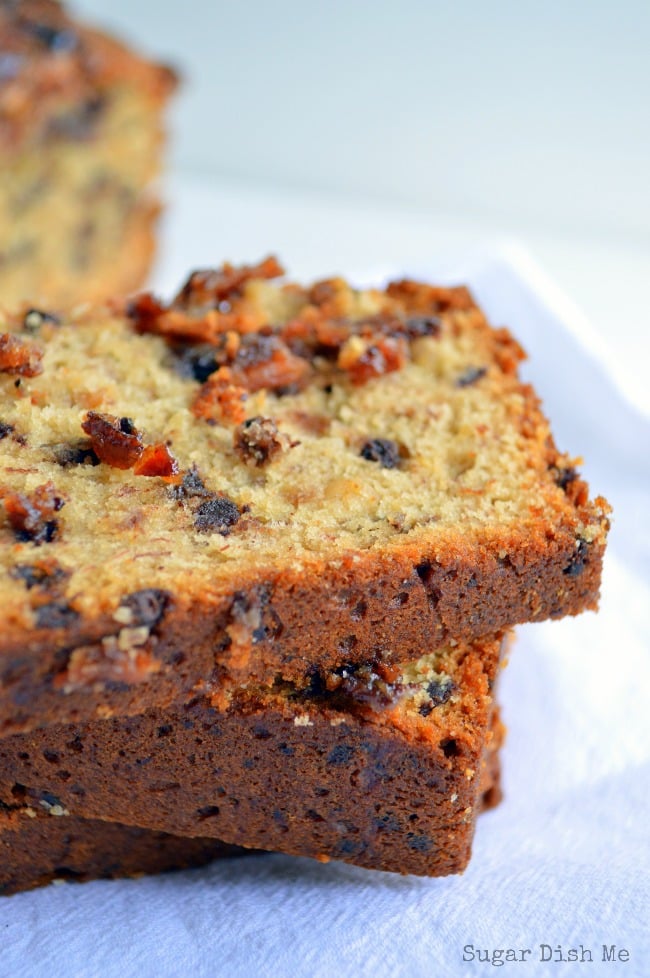 I’m not sure why I waste my time (and limited patience) trying to work after 5 p.m.

Anyway, I guess we’d better get down to bread business before someone realizes I have typed almost 400 words. 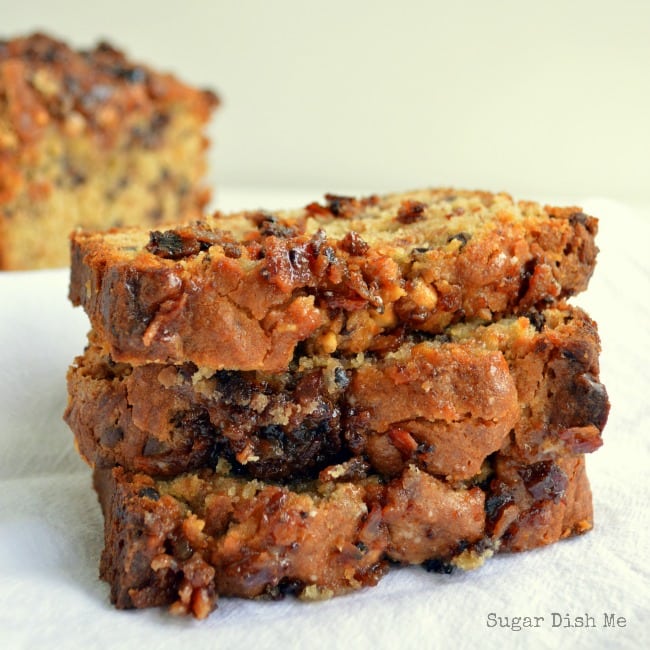 I put peanut butter in the banana bread! Crunchy peanut butter. You can use creamy peanut butter, but I was aiming for flavor AND texture, and I decided that everything about this bread needed to be over the top. So I added mini chocolate chips. AND THEN I topped it with a teensy bit of glaze that holds candied bacon in place.

What’s great is that with everything going on here, this bread is not tooooooooo sweet, or even too rich. There’s a nice balance between salty peanut butter and sweet bananas, soft bread, and crunchy bacon. This banana bread has a really tight crumb which I love, but it’s also a really sort of fluffy bread. Basically, Elvis Banana Bread has got it going on. The King knew what was up.

And with that I am going to break up an argument about who would win in a battle between Iron Man and Batman. Recipe follows.

Print
Prep time
15 mins
Cook time
50 mins
Total time
1 hour 5 mins
The King would give this Hunka Burnin' Love Banana Bread his stamp of approval! Elvis Banana Bread has crunchy peanut butter, mini chocolate chips, and is topped with candied bacon!
Author: Heather Tullos
Serves: 2 loaves
Ingredients
Instructions
Notes
1. I used crunchy peanut butter for a little extra texture but you can certainly use creamy peanut butter.
2. BE SURE TO CHECK your bread with a pick in the center before removing from the oven. You will have bits of melted chocolate on the pick -- you just want to watch for anything doughy or that looks like uncooked banana. Sometimes the bake time is a little longer than is called for.
3.2.2708

Oh and hey! It’s Leftovers Club Day! This month I was paired with Michele from Alwayz Bakin’ . I realized AFTER I mailed the bread that she just posted some delicious looking Peanut Butter Banana Muffins so… great minds think alike, and also I hope she likes peanut butter and bananas as much as Elvis because there’s a lot of that going on in her life. If you’d like to join Leftover Club and swap baked goodies with another food blogger, you can sign up here.

Can you freeze this bread?

@Beverly Bedard, did you freeze it? I have the same question.

Not sure, I've never tried!

Can I make this a day or so ahead of time? Or will it get soggy? Looks delish!

Of course you can make it a day ahead! It won't be soggy at all. The bacon doesn't taste as good after 2 days though so I wouldn't go more than a day :)

Thank you for the recipe, i took it out and i put it on my blog by puuting a link to your website. Sorry about the spelling, i am french :-)

15 Banana Bread Recipes You Need to Try | The Weary Chef