For this month’s Surprise Recipe Swap I was assigned This and That, a blog that dabbles in Canadian, American, and African cuisine. I’ve been playing with new cheesecake recipes to post for awhile now, because it’s been too long, right?

So after some searching around Marly’s blog I settled on Nanaimo Bar Cheesecake because um… wow!

I’d never heard of Nanaimo Bars before so I had to do a little research. If you are in the Always-the-Last-Person-to-Know Club with me then I need to explain that Nanaimo Bars are a Canadian treat named after the west coast city of Nanaimo, British Columbia. Traditionally they would be entirely no-bake and would consist of 3 layers: this completely awesome and chocolatey crust chock full of shredded coconut and chopped nuts, a light custardy vanilla layer, and then a layer of melted chocolate.

I did make a few changes to the original recipe, but nothing crazy. I also opted for cheesecake bars instead of cheesecake slices because I’m mostly a dessert-on-a-napkin kinda girl. Also I thought it was important to let the crust shine with this recipe– the bottom layer is really where it’s at.

I was totally smitten with Nanaimo Bars!!! 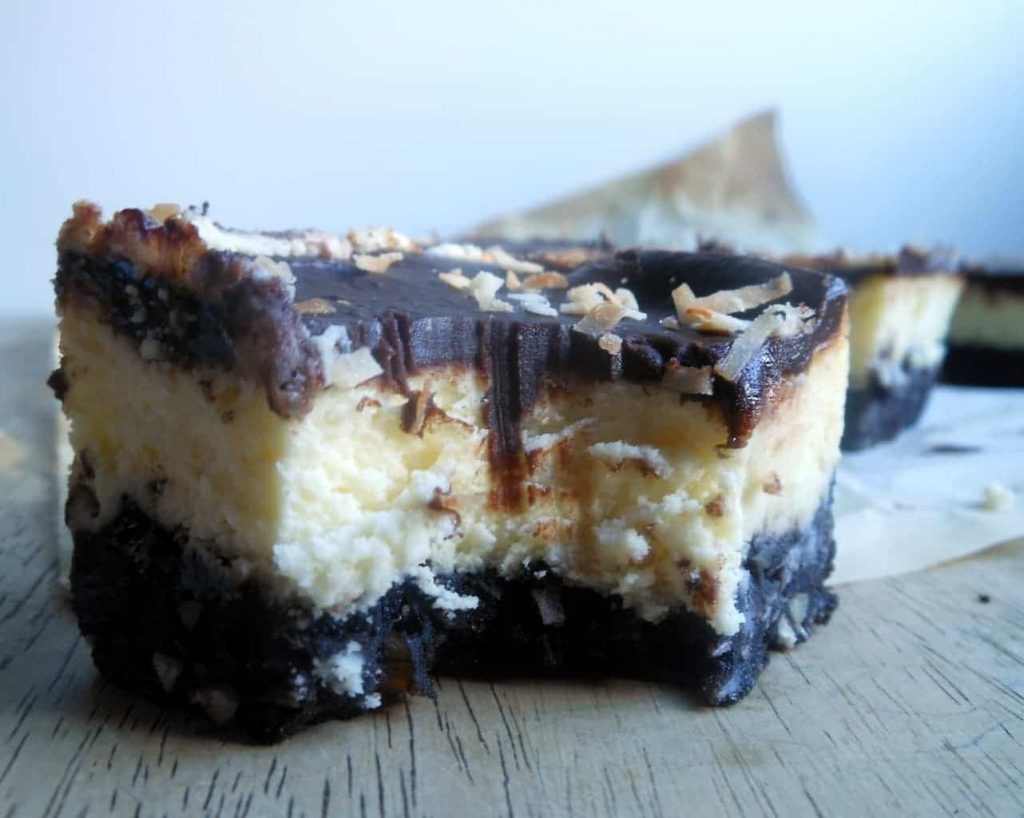 Print
Prep time
20 mins
Cook time
30 mins
Total time
50 mins
Author: Sugar Dish Me
Serves: 16 bars
Ingredients
Instructions
Notes
To toast coconut, pre-heat the oven to 350 and scatter the coconut across an ungreased baking sheet. Bake for just a couple minutes until it's a pretty golden color-- check it frequently because it's quick to burn!!
3.2.1753
Hey, Canada. I found another reason to love you.

To see my past recipe swaps with SRS…

If you’re interested in participating in the Surprise Recipe Swap click on the “I participate” icon below and fill out the sign up form. You’ll be assigned another blog to recipe shop (in secret) and another blogger will be assigned to you. Posts/reveals go up on the 20th of every month. It’s fun!

Oh this sounds mouth watering. Thank you for sharing this recipe.

Okay, I HAVE to go get some Oreos!!

[...] usually stick to cheesecake bars because I , without fail, crack the cheesecake EVERY. SINGLE. TIME. There are a zillion billion tips [...]

I love cheesecake (actually it's my favorite dessert) and Nanaimo bars and these are right up my alley!

I think cheesecake is my favorite, too. But it might be ice cream. Actually... I can't decide. But Nanaimo Bars are super!!

God Bless Canada, man. They have maple syrup and Nanaimo bars which, as far as I'm concerned, is kind of one-upping America's hot dogs and apple pies. JK, I love hot dogs way too much.

This Nanaimo Bar Cheesecake looks SO outrageous. Get it in my face.

I was so oblivious to the Nanaimo Bar goodness. Does the US have a bar named after a city besides Hershey? Because I'm sorry, Hershey. You got nothin on Nanaimo.