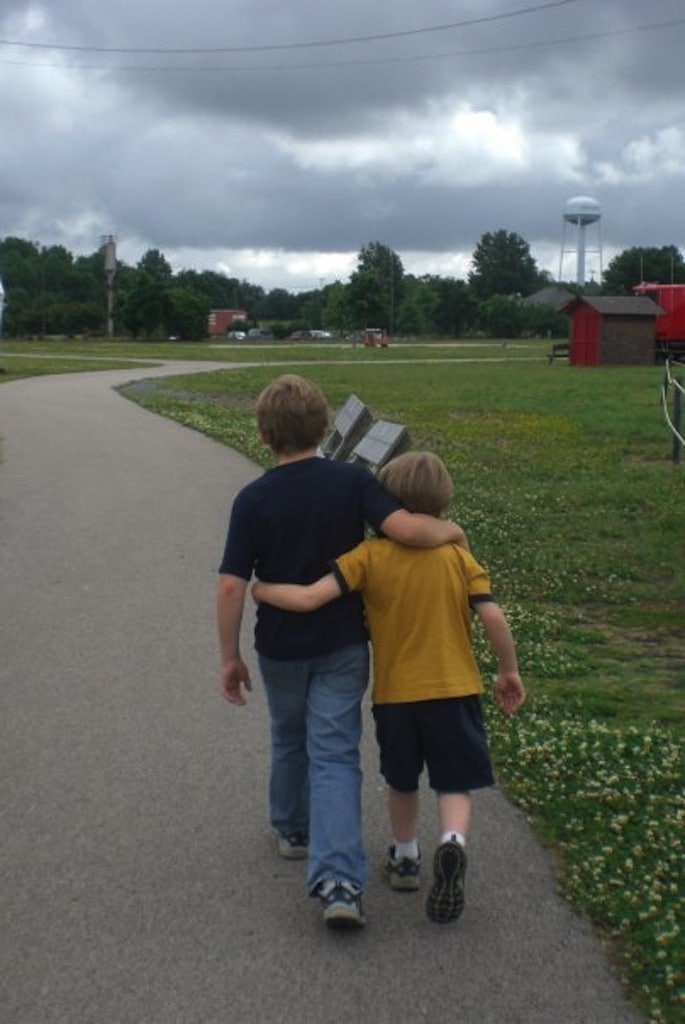 Originally published in February 2012. Always appropriate. True Love comes in so many forms.

This photo dates back to when my little boy was pocket sized and my bigger than little boy would still hold my hand.

But that’s the beautiful thing about siblings. You pick and fight and take each other’s things when you’re small. You play games together and tell secrets and stories. You learn from one another (to this day my little sister still holds her pen some crazy way- just like me! – because when we were little we used to play school). You share a whole world of experiences. You grow together, no matter the difference in age. There are arguments and tears followed by laughter and good natured teasing.

These two cutie boys disagree every five minutes. They bicker and correct each other and deliberately get on each other’s nerves. They tattle and storm off and drive each other bonkers. They heckle and harass… and sometimes they are downright mean.

But they also share whispers when they’re supposed to be sleeping at night. They cheer each other on and lift each other up. The little one wants to be just like his big brother. Big brother always casts a watchful eye and a helping hand. They have inside jokes and contemplative conversations when they think no one is listening. Together they learn and ponder the world…

And they don’t even know that it’s true love. But one day they will.

[...] and greens and like 17 kinds of cheese), my infamous pumpkin cake (find a mini version of that here), or the small Mexican feast we shared before she left for France (where there is an apparrent [...]

A Sister’s Request « Sugar Dish Me

[...] and greens and like 17 kinds of cheese), my infamous pumpkin cake (find a mini version of that here), or the small Mexican feast we shared before she left for France (where there is an apparrent [...]

Hi Heather - thanks for coming by my blog. I love your blog name and what your mother told you. My boy is now 17 (yikes) and my baking girl is 14 but the boy bakes and cooks also - quite well. This is such a cute post and an easy and fun recipe. Love the idea of cutting into heart shapes for Valentine's Day! Fun Fun Fun!

Hello and thank you! For now I'm pretty sure my little boys can't be trusted in the kitchen with anything more than cereal or peanut butter and jelly, but oh they love to help! Sometimes they fight over who gets to help with what. Never over who gets to wash the dishes, though. What's up with that?

Sweet picture of your boys :) I have big kids now (17, 21) and they still bicker, but definitely have each other's back! Pumpkin and cream cheese frosting?!! Heavenly combination and adorable presentation.

Thank you! My boys are getting big for sure (almost 9 & 12) and it makes me a little sad. Ok a lot sad. But I have two sisters and two brothers and nothing on this earth can compare to the crazy awesome relationships we share. Only a few quarrels anymore :)

These little heart cakes are actually a tiny version of a great big pumpkin cake that I make in a large jelly roll pan & then slice & stack. Thanks for the compliments!

A favorite photo for sure. I love your words. They will always have each other. And they have a rowdy lovey extended family to model themselves after. And to eat yummy cake with.

Thanks, Momma :) This picture is for sure one of my favorites.