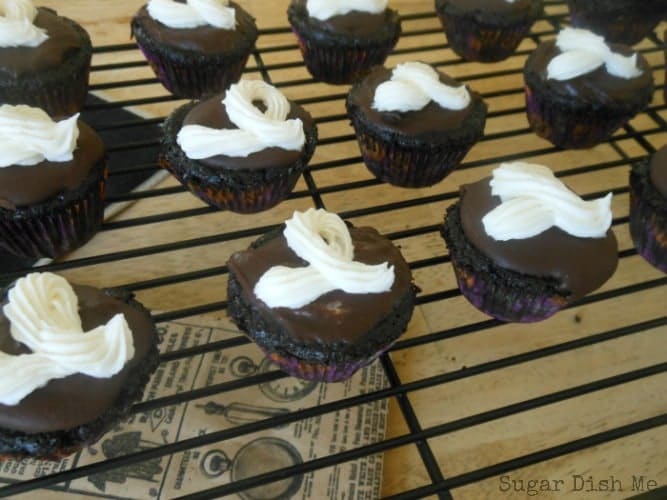 Sometimes I think that Chad might be from another planet.

And I’m not talking about that Men are from Mars crap.

I’m talking about normal cultural references… stuff I thought most people our age (most ages) knew. This all started a few weeks ago when we began toying with the idea of furniture shopping for a few things we need around the house. I’m a sucker for Rooms-To-Go and Ikea marketing; everything in one place at a discount!!! Plus I am really not good at decorate-ey fashiony sort of girl stuff, so wandering through places like that gives me some idea about what in the world I’m supposed to do. A Rooms-To-Go ad appeared in our mailbox and I flipped through it, commenting on things I may want to go see. I said something about liking these chairs but that they were probably sort of pricey because they have Cindy Crawford’s name on them. And then he said this: 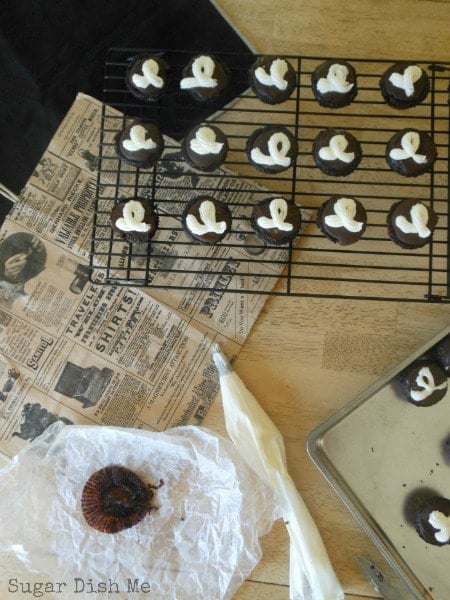 So I’m like, “You know. CINDY CRAWFORD. Supermodel. Pepsi commercial. Very distinctive mole. Cindy Crawford!” And he still had no clue.

I busted out some Youtube and pulled up the Pepsi Commercial thinking he’d go, “Ohhhhhh. Cindy Crawford.” But no. Chad has no idea who Cindy Crawford is.

I guess maybe I should be thankful for that?

Saturday afternoon gave him some lazy time on the couch while I worked out some elaborate kitchen project (but for the life of me I have no idea what we ate on Saturday…?). He was scrolling through the Netflix library looking for something suitable to half watch/half sleep through, and then IT HAPPENED AGAIN.

Chad asked me, “What’s ‘Heathers‘?” Ummmmmm, are you kidding me?

First of all… my name is Heather. And though I bear absolutely ZERO resemblance to anyone in the movie, I’ve spent my whole life having people draw references to it when I say my name. PLUS I thought ‘Heathers’ was one of those movies that you everyone HAS to see. It’s like saying you’ve never seen The Breakfast Club. 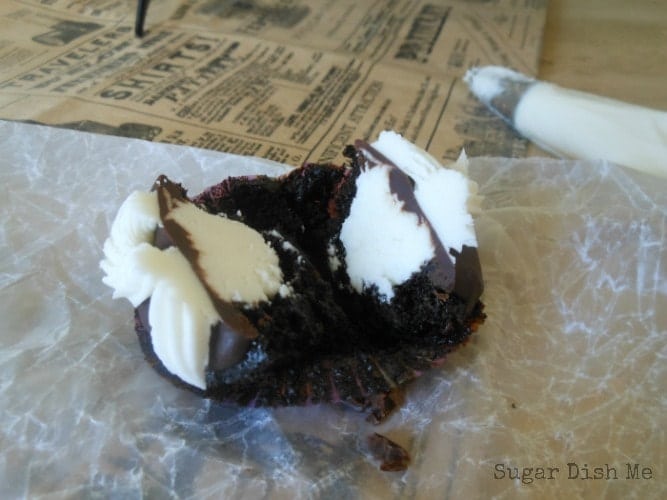 So I told him that. AND THEN he said that he’d never seen The Breakfast Club.

I almost fell over from shock.

I’m pretty sure both of the kids have seen The Breakfast Club. Where has Chad been? Under a rock? And how do you find your way into adulthood in the year 2012 knowing who Conway Twitty is but not Molly Ringwald?

To be fair, he sort of saved himself a little bit when he said, “Oh, you mean the one with all the kids in detention and that one weird girl eats Cap’n Crunch on her sandwich?”

So I made these little two-bite homemade versions of Hostess cupcakes. Chad DID know what a Hostess cupcake is… I was worried there for a minute. These taste exactly like the real deal, except better because the filling doesn’t have that odd sugar-flavored-but-flavorless-vegetable-oily thing going on. AND I topped them with a chocolate ganache. AND this recipe makes about 48 little squishy two-bite chocolate dreams, which is waaaay more than you’ll get out of a box of those cupcakes. AND since they’re so small you can have two without the guilty compulsion to run 16 miles. Even Cindy Crawford might indulge. 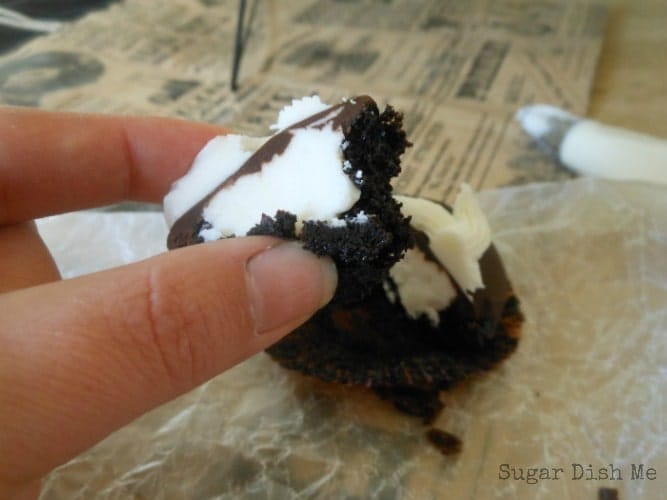 Print
Prep time
30 mins
Cook time
20 mins
Total time
50 mins
Author: Sugar Dish Me
Serves: 24
Ingredients
Instructions
Notes
** If you do not have a pastry bag, a ziploc bag with the corner lobbed off works wonders.
3.2.2124
Slightly adapted from THIS recipe at Can You Stay for Dinner– All of Andie’s recipes are comforting and amazing, but her real-life everything is pretty much where it’s at. Hers was one of the very first blogs I ever fell in love with and I still gobble up every post as soon as it hits my inbox.
← Previous
Creamy Balsamic Vinaigrette 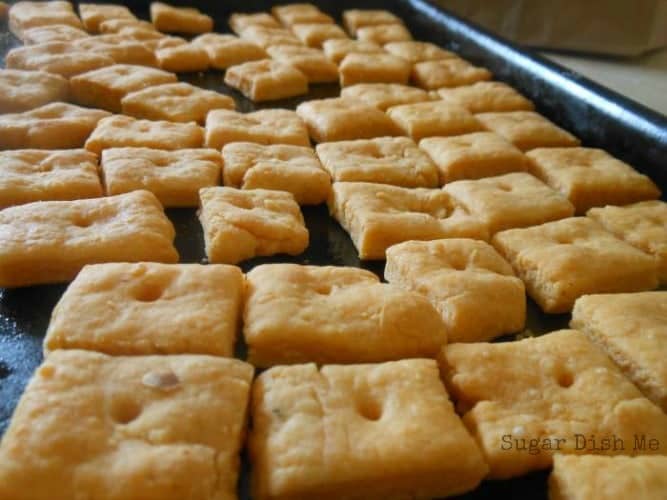 Next →
Cheez-Its, From Scratch
Click here to cancel reply.

Where did my comment go? So odd....I think they are going to Spam?

Also... I REPLIED to that comment. And I can't find it. But I DID read it. Soooo strange.

Wordpress is being really weird right now... I saw the comment and then I didn't see it... I'll find it!

Oh...oh Chad lol I can sort of see him not really knowing who Cindy Crawford is...but only because she's more behind the scenes in the last 10 or so years, but still...if when Googling he still doesn't know who she is...then clearly he has been under a rock haha Boys!! These cupcakes look sinful!! I LOVE Hostess cupcakes. I'd always eat the cake off the cream part then save the cream and chocolate topping for the end...mmmmm so good!!! lol Random question....are you fluent in Spanish? haha

I WISH I were fluent in Spanish. My friend Jen is in the middle of college-level-Spanish crazy and I THINK she said that she really enjoyed the chocolate (because reading this made her abandon all books and go buy cupcakes) and then something about her Spanish professor being an ass. Sounds about right. I love a Hostess cupcake! These little bitty ones were awesome..

Aaaaand now I'm going tot he store for Hostess cupcakes because I have a chapter exam in Spanish tomorrow & don't have the time to bake...grrr!!

Eat now, bake later. I mailed some to my sister, but stuff gets to her in less than 24 hours. And even then I was worried the chocolate would melt... Como estas?

LOL! Well he sort of redeemed himself with knowing a little something about The Breakfast Club....These sound DEEE-LISH!! so I'll definitely be making them in the future....BTW...I got to hear Molly Ringwald speak at an event for women a year ago this past April..pretty cool!! She's still so darn cute :)

That is so cool! I love her. She's adorable. And I love that she's not one of those tragic teen starlets... she just grew up, had a family, stayed awesome. Also I want my hair to do what hers does. I hope you'll make these! Except they are completely addictive. Find some people to share with or you'll consume 46 of the 48 and not think twice.If the boys hadn't been here I'd be running a marathon right now.