I’ve made these 3 times.

My original intention was to put them in your face with a big scoop of melty vanilla ice cream and a few sprinkles of cinnamon but a funny thing happened.

So I decided that ice cream or no ice cream, I was gonna have to go ahead and cut my visual-aid losses and share these blondies because there’s only just so much butter and brown sugar I’m willing to sacrifice for a photo. Also Chad and the kids needed some vegetables.

The good news is that these are totally delicious. And so they were perfect for my Leftovers Club buddy this month – Laura from The Spiced Life.

Once a month I swap goodies with a bunch of other food bloggers on the premise that we have lots of leftover baked goodies from all the recipe testing. I feel like a broken record saying this, but I actually live with a small army of human vacuum cleaners and leftovers are never a problem (unless I make soup and then it’s all mine). I asked Laura about preferences ahead of time and she said anything in small batches! Good thing too because if I sent any more out of here than I did I might be in great big blondie trouble.

Laura sent me these little Bourbon-Soaked Orange Loaf Cakes with Currants that were straight up amazing. I’m so excited to get my hands on her recipe!

If you would like to participate info for signing up plus all the other awesome Leftovers Club treats can be found at the end of this post. Join us! Be my partner! Send me cookies! 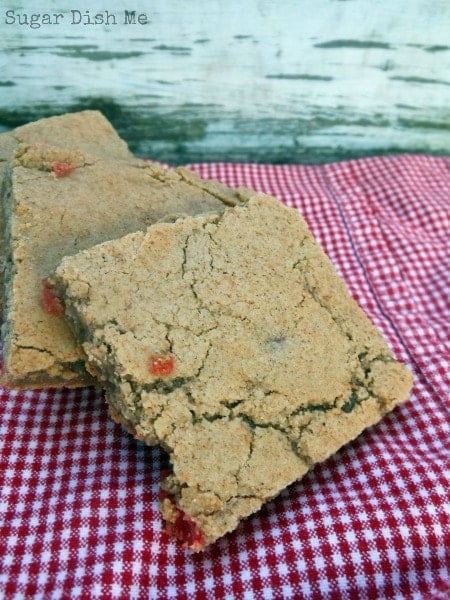 The most important thing you need to know about these blondies is that they are LOADED with Hot Tamales chewy cinnamon candies. And some cinnamon whiskey, for good measure.

So the result is a soft chewy blondie loaded with cinnamon flavor and chewy sweet cinnamon spice. They are addictive.

And check out all the rest of the treats!

So these disappeared instantly! And I swear truly instantly, I am only just commenting now because I am a chaotic and also lazy bag blogger friend who takes forever to get around to visiting posts! I loved their chewy texture... man now I am craving another one!

I love a little bit of spice with my sweet! The hot cinnamon in these must be super awesome. And I live with a vacuum cleaner also! Leftovers are generally never a problem around here.

Thanks Joanne! And I have to say that the human vacuum cleaners are pretty handy most of the time. Now of I could just harness their magical metabolism!

Totally intrigued by these! They look delicious! I bet they would be good as the cookie part of an ice cream sandwich!

That right there is the best idea ever ever in the world. Really.

Elizabeth @ Confessions of a Baking Queen

Working at a bar where we go through TONS of fireball I think I need to make these for my co workers :)

Oh my gosh YEAH you do! Also-- that cinnamon whiskey is sooooo good!

You are insane and I love you for it. How on Earth did you think to add red-hots to blondies- so smart! I don't blame you for having to make them three times!

I love you back Ruthy! And about the cinnamon-candies-in-blondies thing. Do it. It is delicious.