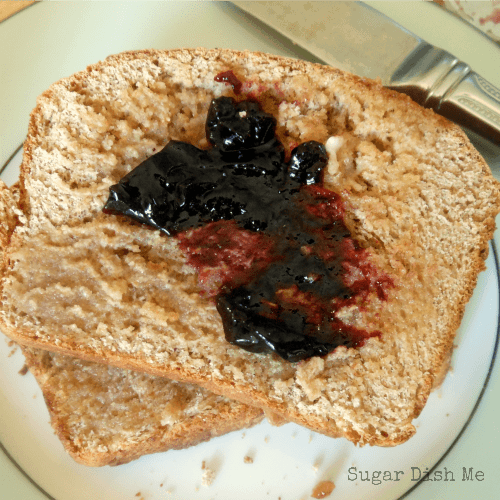 Breakfast is easily my favorite meal of the day. Unless dessert is a meal.

I love breakfast for lots of reasons. Some of them include waffles with whipped cream. Or “Ah-lah-modey”. Other reasons have to do with coffee, eggs, breakfast potatoes. Don’t even get me started on biscuits or cinnamon rolls.

But I have to say that one of my very favorite things about breakfast is that I don’t have to talk my children into eating it (except when I make these Oat Nutty Whole Wheat Blueberry Pancakes – Evan doesn’t like them. Because his taste buds are deranged). So here’s the deal: I cook. Every night. I think I’m pretty decent at it… unless all of my family and friends have carefully constructed a very elaborate lie that includes all of you. Gah. That would be weird, right? One of you would tell me I hope.

Okay, so DINNER. I cook the food, I set the table, I call the family, we all sit down. I’m going to take a wild guess and say that 4 out of 7 days one or the other of my boys has to be coaxed into eating his meal. It. Drives. Me. Crazy. We’re eating good food over here!

Evan tries to pick out every shred of seasoning – today he was totally offended by cilantro. He spends mealtimes dissecting food, searching for things like green peppers and red onions. Andrew, to be fair, has gotten much better about this with age. But he still has major aversions to all beans (unless they are in chili), shrimp (unless it’s shrimp cocktail or fried), and mushrooms (unless nothing- he hates them).

Breakfast presents NONE of these problems. No matter what I put on the table at breakfast, the little boys are all about it. Maybe pickiness expands as the day wears on? Maybe they’re still asleep when I feed them at 6:15 a.m.? Whatever the rhyme or reason, in the morning I never have to tell them to finish their food 14 times. It’s such a relief.

Most days my breakfast is cereal. Or oatmeal with fruit. Lots of days I call a banana + coffee breakfast. I started making this bread last month, and it has quickly become my favorite breakfast staple. It’s great fresh from the oven. But if you don’t feel like baking for two hours before you eat the first meal of the day, it’s still great the day after, toasted, with a little bit of butter and way too much blackberry jam.

P.S. The power just inexplicably went out … what in the world.

This bread is fantastic covered in peanut butter and sliced bananas. It makes THE BEST cinnamon toast. Slice it up and soak it in custardy goodness for french toast? Amazing. Mapley bacon and egg sandwiches? Yessssss. Oh! In one of those breakfast casseroles that calls for cubes of bread? I just thought of that. Just right this minute.

I call this “breakfast bread” because it’s a little bit cinnamony and a little bit sweet with lots of earthy whole wheat and oatmeal goodness. Not that it wouldn’t easily pair up with sliced turkey breast, a big leaf of lettuce, and a cranberry spread… wow. My mind just totally went to a Thanksgiving place…

But really this bread is suited for breakfast. Slice it thin. Dip it in egg.

Your kids won’t complain about a thing.

Except maybe the egg.

Yum! I liked the no-knead whole wheat bread you posted awhile ago, and I bet this is just as fantastic! Hooked on whole wheat!!

Hey, Sandra! This bread is reeeeeally good. Sweeter than the no-knead wheat bread which is why I like it for breakfast, and it does require a little kneading, but it's not a crazy sticky dough. I love this bread.

[...] long. Except people aren’t rolling their eyes at me. I think it would be great with the Maple Oatmeal Bread from Sugar Dish Me also (note to self: stop dreaming about this bread and make it [...]

This reminded me of my sister - she HATES mushrooms! Always has, always will. When we were growing up I loved that she hated them though because it meant anything that had mushrooms in, she would pick hers out and give them to me so I got extra (and I love mushrooms - always have, always will.) I can sympathise with Evan's other aversion-exceptions though - I avoid apples, unless they're pink ladies (and only then if they're REALLY pink!), I love tuna (real) but hate tuna (tinned), I hate cheese (as I think we already know!!) unless it's on pizza....! I'm not that fussy really ;) Breakfast is probably my least favourite meal (hence peanut butter toast every single day!) breakfast means coffee to wake me up and food because I've got myself eating it as a real proper grown up, because that's what real proper grown ups do (what real proper grown up would not eat the most important meal of the day?!) That said, I love the days when I'm allowed to be a bit naughty and have a croissant instead, or post dentist breakfasts of cake and coffee at the bar, or Friday breakfasts at school which always revolve around cake, biscuits or on the best days, both! So, it is with that in mind that I say - YUM! to this - cakey bread/bready cake (bread that's sweet and looks a bit like cake, like the yummy looking one you've made here, is basically where I'm going!) I could eat and eat and eat for breakfast. Then breakfast would definitely be my favourite.

I very happily eat all of my children's discarded mushrooms. Evan loves apples AND cheese (sorry, Rachael.)!! Pink Ladies are THE BEST, though! I am soooo with you! The really pink ones are my faves. And they bake just as we3ll as a Granny Smith. Tart and sweet and crisp and perfect. Thank goodness it's apple season here!Cakes for breakfast are soooo wonderful. I think that's why I love breakfast so much. Dessert-ish options are totally acceptable.

I am soooo making this over the weekend, oh yes I am!

Hey, Deanna! Let me know how it turns out! I freaking love this stuff. It needs to be french toast by tomorrow morning :)

What an incredible breakfast bread my friend :D