Start with a box of brownie mix and add just a few things to make these totally terrific Neapolitan Cheesecake Brownies. You won’t believe how simple it is to make these pretty layered treats! 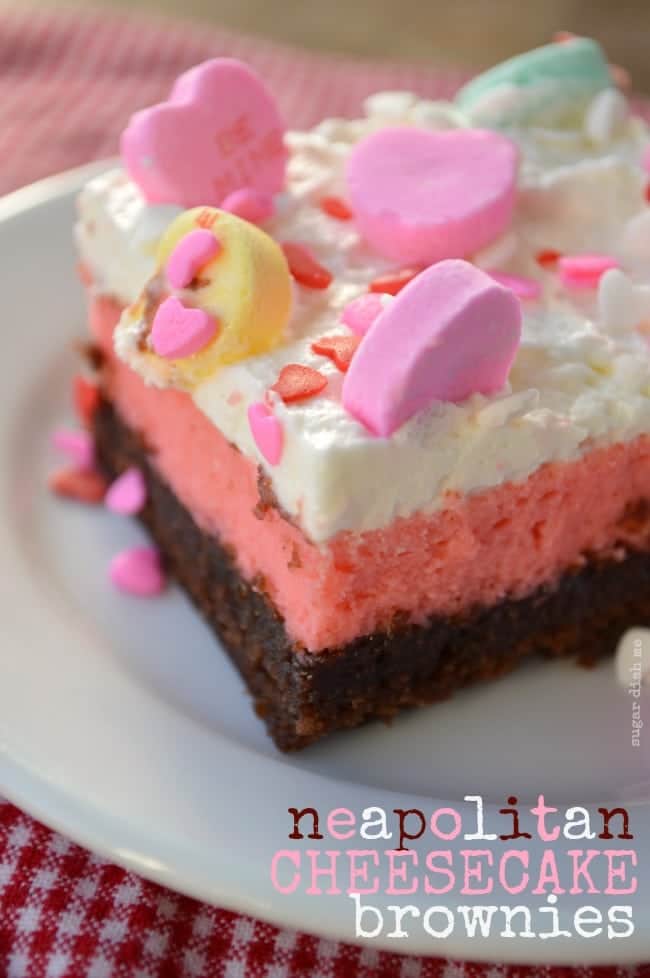 This is a sponsored conversation written by me on behalf of The J.M. Smucker Company. The opinions and text are all mine.

Yes! More brownies. Because life is busy and look how EASY  it is to turn out super fun desserts with a box of brownie mix! A week or so ago we had those {everything but the} Kitchen Sink Brownies. This week we have Neapolitan Cheesecake Brownies.

I can’t ever make Neapolitan anything without referencing this poor man that will forever be burned into my brain because he asked me to get him the “Napoleon ice cream” from the freezer in this little store I used to manage. He was completely serious, and asked me for Napoleon ice cream no less than three times with his thick southern drawl, before it clicked in my brain that Napoleon = Neapolitan. 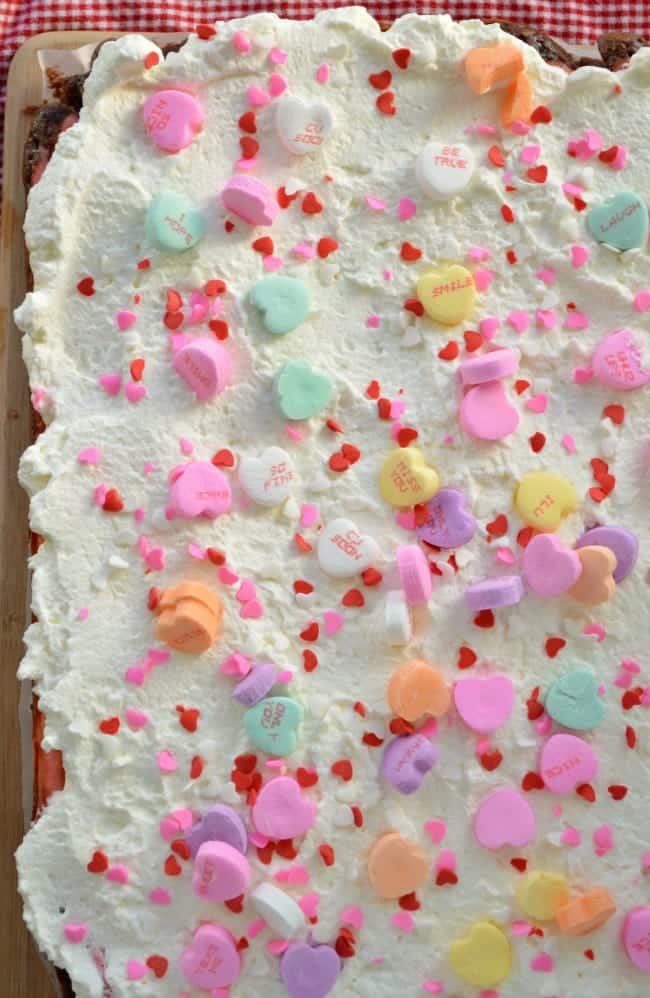 Every year when Valentine’s Day approaches I feel like it majorly sneaks up on me. I always end up with a zillion fun food ideas, but not enough time to execute them. These are easy enough that I was able to make them in between rescue events over the weekend. They took 5 minutes to mix up, 30 minutes to bake, and when I got back home I covered them with whipped cream. Plus conversation hearts and sprinkles. 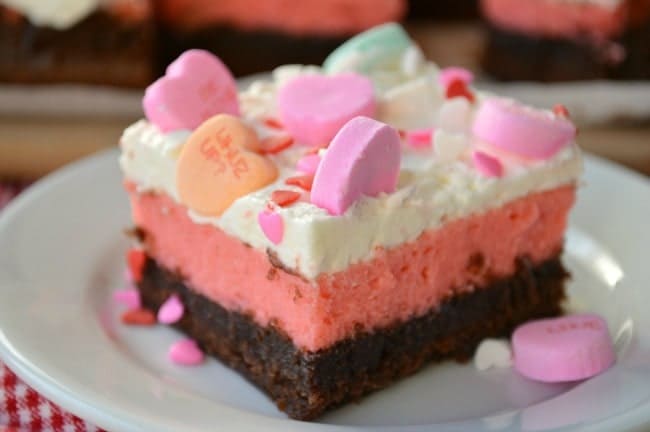 Is there anything more fun than conversation hearts on your Neapolitan brownies? I’m not sure there is.

I sent these brownies to work with Chad because sometimes it’s fun to mix up a moment and surprise people with treats. Evan (the helper hands in all the Kitchen Sink Brownie photos) manned the stand mixer with the cream cheese while I whisked together the brownie mix by hand.

I bought Pillsbury Mocha Fudge brownie mix for these, and the tiny hint of coffee flavor? Chad noticed it right away and asked me about it. He asked me about it in a way that indicated he was talking in sentences that all end with exclamation points. What I’m saying is, Mocha Fudge was a good move. Honestly though I don’t think you could go wrong. 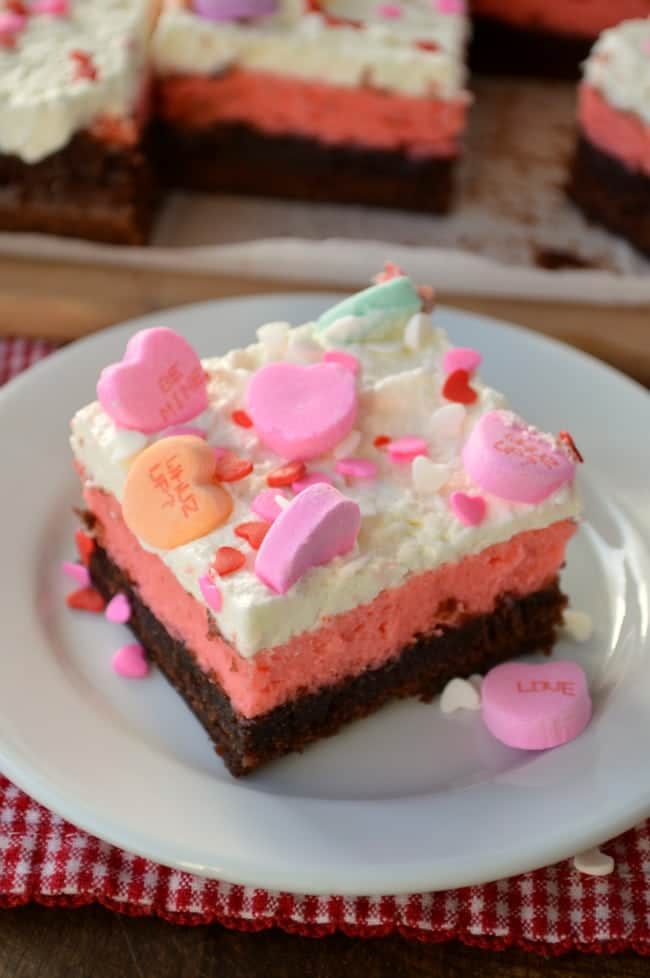 One last thing worth noting is that I used REAL whipped cream. Because I love it and I usually have heavy cream on hand. So I included that in the ingredients and instructions. But! Feel free to bust out a can of whipped cream to cover the top here. Or non-dairy whipped topping. That works, too. 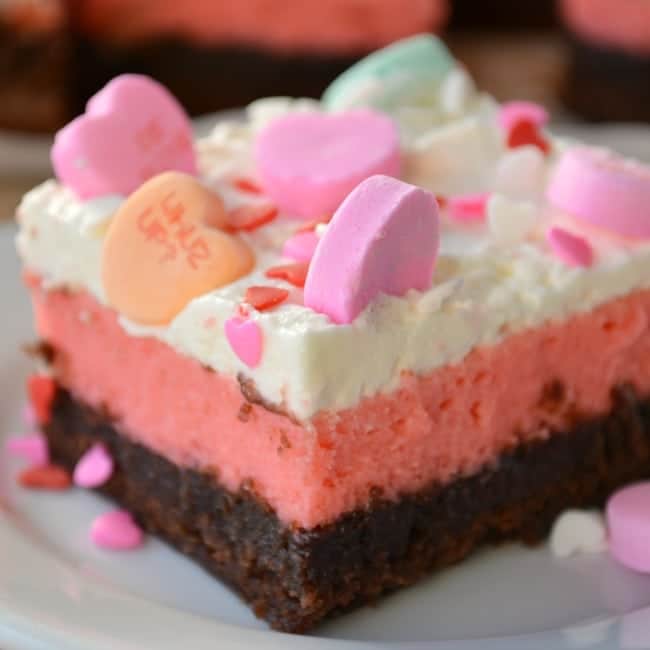 Neapolitan Cheesecake Brownies come together crazy fast and are perfect for the busiest of days when you still need something cute to share with coworkers or kids at school. The pretty pink cheesecake layer and conversation hearts make this perfect for Valentine's Day!

If you don't want to make your own sweetened whipped cream, feel free to use non-dairy whipped topping or spread whipped cream from a can over the top just before serving