Remember the S’mores Brownies from the other day?

These brownies are everything you ever wanted a brownie to be, but with a s’mores smack in the middle. And while we were taste-testing these the other day, all I kept thinking was, “we need ice cream!!!” Like I reeeeeeally wanted a s’mores sundae. Let’s make that happen, okay?

So you know by now that I am right in the middle of a family birthday bonanza. Yesterday I had various cake batters from one side of the kitchen to the other while I desperately tried to keep up with the latest episode of Nashville on my laptop that was precariously balanced for my viewing pleasure. Run on sentence much?

Not me. So we upped the game a little and cut up the remaining brownies, froze them, and then added them to this old time vanilla ice cream.

I love this vanilla recipe because it’s REALLY SIMPLE. No eggs, no cooking first, no pour here and then pour there and then pour again. Vanilla ice cream can get waaay complicated if you’re not careful. But for this you just whisk together cream, milk, sugar, vanilla, and a pinch of salt and then dump it in the churn. We were IN LOVE with the creamy softer version that first came out of the ice cream churn.

But when you stir in the brownies and put this in the freezer, it turns into a hard-dipped ice cream treasure. There are s’mores brownies in every bite and if you let the ice cream soften for just a few minutes it scoops up smooth and makes an awesome addition to a sugar cone. Thumbs up from Chad’s grandpa– and he’s the ice cream pro. 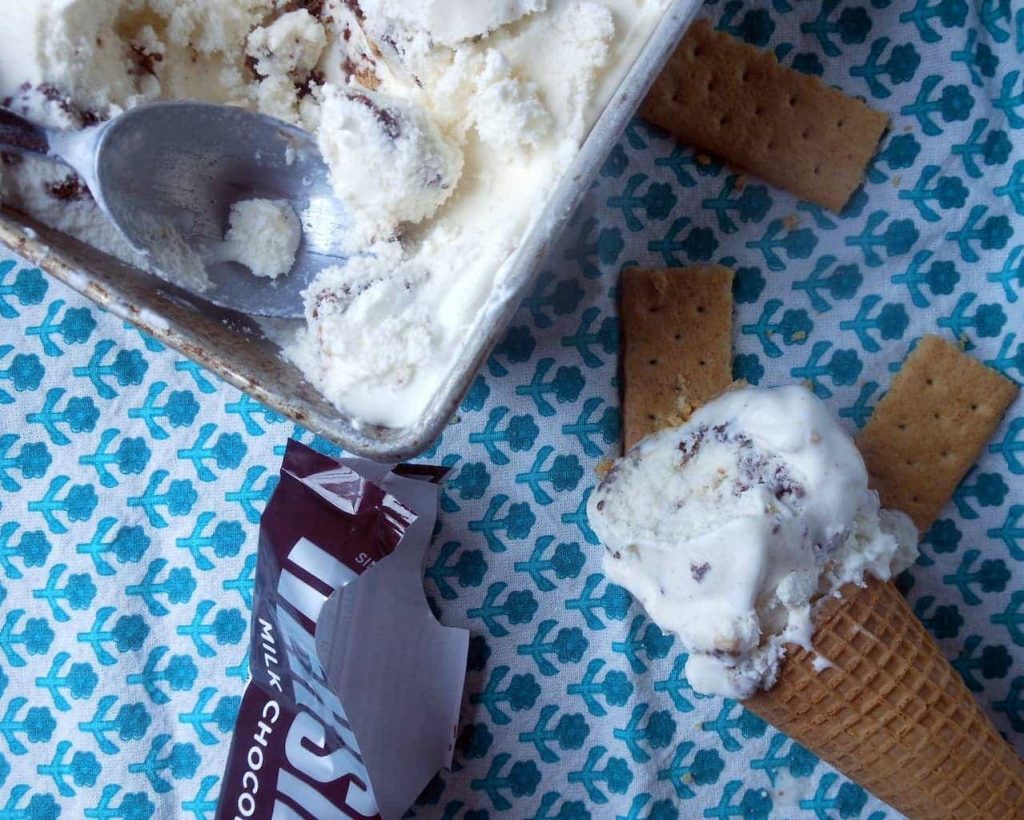 I tried this recipe last weekend and it was an absolute smash. The ice cream maker was gathering dust but now its back in use! The only thing is that the household insisted that tons of chocolate chips were thrown in lol.

Janene- I like the way your household thinks! Chocolate chips for the win! Glad you enjoyed it!

I'm co-hosting Tried and True Recipe Party, and I can see why this ice cream is featured this week:) I would eat a few brownies, then make the ice cream and eat that too:) Lynn @ Turnips 2 Tangerines

Hi, Lynn! That's so nice! Thanks so much! I had lots of fun link surfing there last week. Thanks for co-hosting and sharing my stuff!

Yum! I found you from the Marvelous Monday party. I would love it if you would share at my party: http://rediscovermom.blogspot.com/2013/05/tried-and-true-recipes-11.html

But mostly love because OHMAHGAWD I mean obvi.

Ben & Jerry's week: I love/hate you back.

And my iPad is always precariously placed somewhere as I watch tv while I cook...it's a dangerously aweosme situation. Always.

It's necessary, right? Did you see that cool thing they sell now that sticks your iPad to the fridge like a magnet? I think Dorothy @ Crazy for Crust reviewed them. Super cool!