This Easy Apple Butter Waffles Recipe is the perfect blend of crunchy outside, soft, fluffy inside, and delicious apple butter flavor. Topped with cinnamon syrup, this breakfast recipe will totally make you swoon. 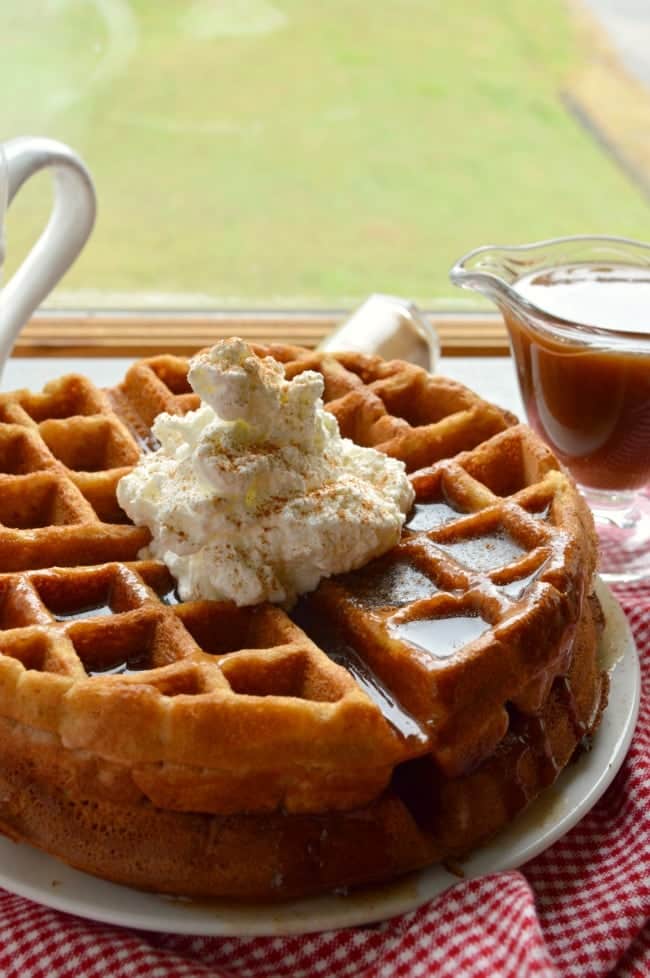 This post is sponsored by Musselman’s! I am so thrilled to be partnered with them again this year to bring you some fun ways to use apple butter in your kitchen. As always, all opinions, photos, and original recipes are my own.

I finally bought a waffle iron, you guys. FINALLY. And honestly? I have no idea what took me so long!

Someone should have been more pushy and forced me to order this fun kitchen gadget sooner is what I’m saying. Because I L.O.V.E. waffles. They are fabulous. But when we go out for breakfast and I am overwhelmed by choices, I don’t usually end up ordering the waffle.

I think it’s because you never know if they are going to bring you a big fluffy masterpiece or what amounts to the frozen toaster variety. It’s a gamble I don’t usually take, and then I end up with a scramble or a stack of pancakes.

Now that I can make them at home though? Game on.

I’ve made like 17 varieties of waffle since my little gadget splurge last month, but this one is BY FAR my favorite yet. These Apple Butter Waffles are perfectly spiced and fragrant with all the things that make me think of fall.

Cinnamon, apples, brown sugar, cloves. So good. Most of the sweetness and flavor in the waffles comes from the Musselman’s Apple Butter (which, P.S., has removed high fructose corn syrup from this product and that makes me love it even more).

The cinnamon syrup is optional — you could totally run wild with maple syrup here and you’ll still love this waffle recipe — but if you decide to make it, the cinnamon syrup adds a sweet, buttery topping that I could basically drink. 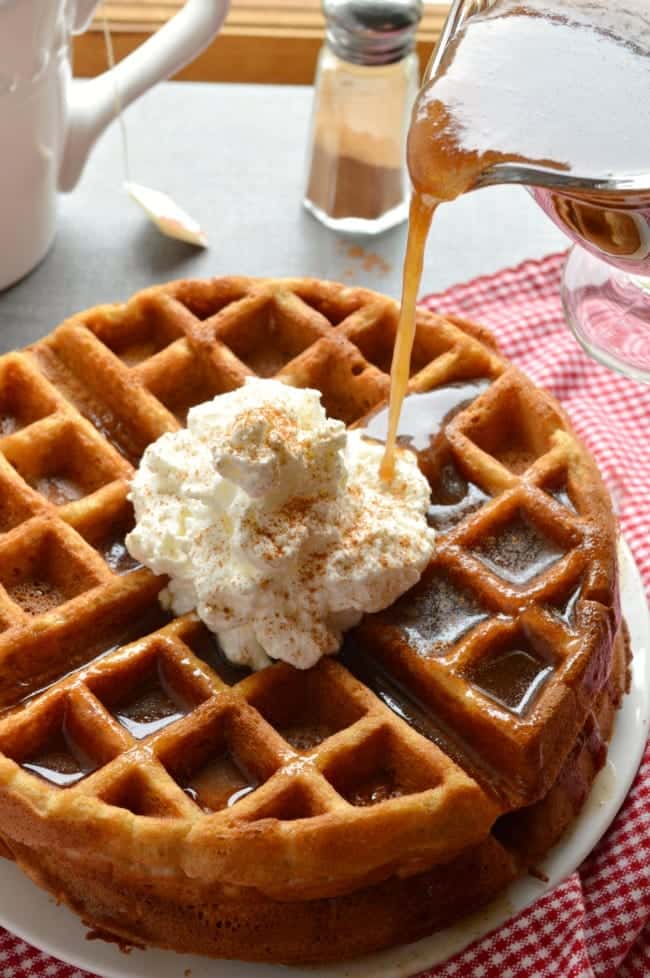 And if you have not yet made yourself buy a waffle iron, this is your reason. 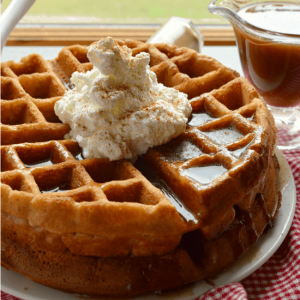 Print
Prep time
5 mins
Cook time
15 mins
Total time
20 mins
An easy, fluffy waffle recipe with just the right amount of crisp on the outside, and the perfect level of sweetly spiced apple butter flavor on the inside. This warm waffle recipe will be a breakfast/ brunch favorite!
Author: Heather Tullos
Serves: 4-6 large waffles
Ingredients
Instructions
3.4.3177
Musselman’s is the brand I have worked with consistently since launching Sugar Dish Me in 2011. So I have LOTS of great apple butter recipes. You can also find more by visiting their Apple Butter Recipes Page. And follow along in social media for all the newest ideas! Facebook, Twitter, and Pinterest! 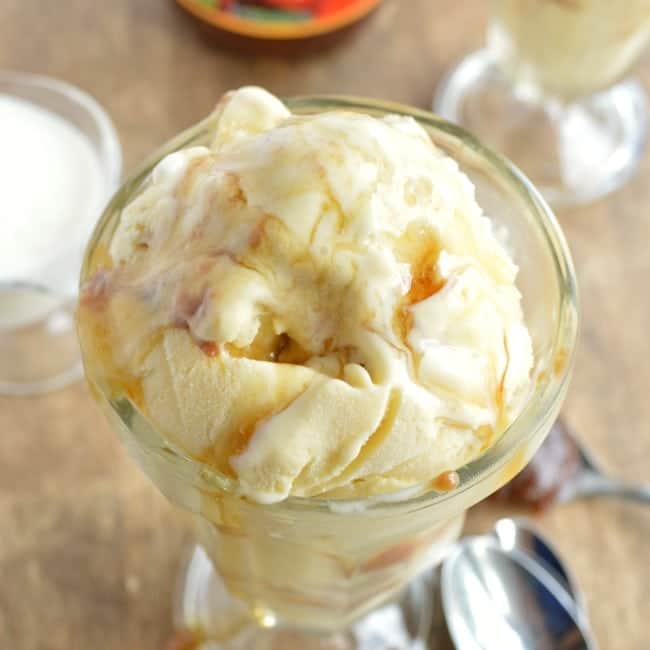 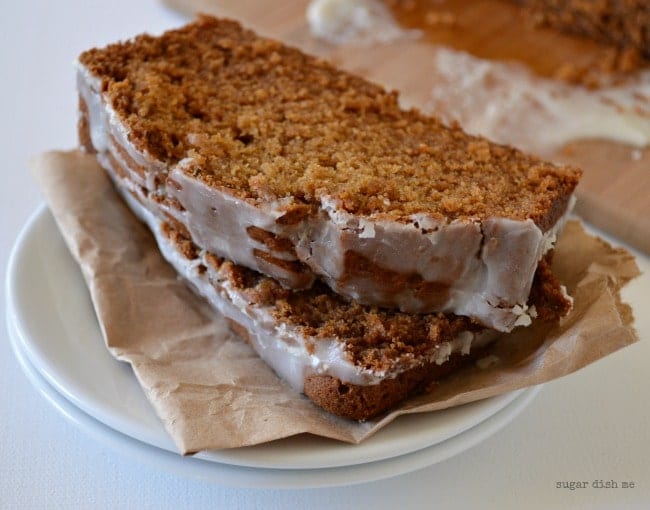 Which waffle maker do you recommend? Thanks in advance - this recipe sounds delicious

These are a solid 4 stars for my family. I made as directed including the cinnamon syrup. I have a smaller waffle iron, so I ended up with 10 waffles. The waffles themselves were fluffy and cooked completely in 6 minutes. The apple butter and cinnamon flavor was subtle and paired nicely with the syrup. However, eaten plain, you could taste the baking powder. So in the future I would both decrease the baking powder and increase the cinnamon. The syrup while delicious on the waffles, taste like what it is: brown sugar and cinnamon. If you want a more complex flavor, I'd go for maple syrup and increase the amount of cinnamon in the actual waffle.

Ok so what can use if I don't have Apple butter?

This recipe looks great. By the way, which waffle maker did you get? I am looking for a new one.

Hey Dawn! I bought this Double Waffle Maker from Cuisinart. I am SOOOO glad I spent the $$ on a good one!

I got one for as a wedding present and I make all kinds of things with it. For Apple Butter, try Amish Wedding if you can find it. It's too good! I used it for this recipe and it was amazing!

Glad you enjoyed it! And what a great wedding gift!